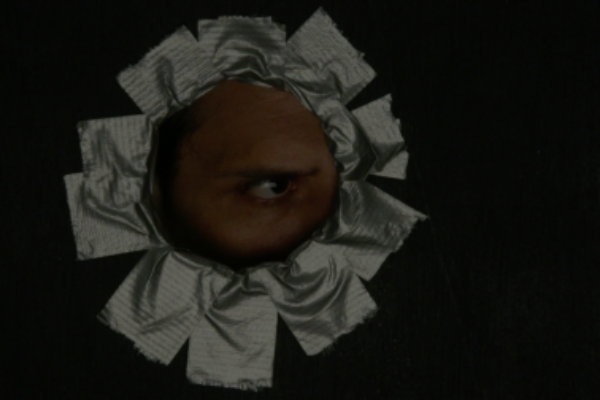 The edginess, with a sense of excitement and surprise that greets you in the typical Queer sauna/stream room – bath house to you Americans- is captured in this  quirky short escapade . But… there’s a twist or two.

The twink Thomas ( Steven Eich) is ill-at-ease when his partner Juan ( Andrew DiConcetto ) takes him to a Queer sauna to spice up their sex life.

First of all there’s a strong hint that Thomas is younger than the 21 he claims to be. But it’s ok because the receptionist ( Trent Walker ) in full Norma Desmond drag and turban takes a shine to what he/she calls “ this pretty boy”.

So no worries there then. Next should Thomas keep his glasses on ? He decides not and off the two go , separating with advice from Juan for Thomas to enjoy himself. A graphic scene suggests Juan is getting more satisfaction than his younger  partner, but then wallop there’s a scream and the first of the night’s murders, in which the receptionist is clearly implicated.

And the blood and gore continue but not  for long as the whole film , by Joao Dall’ Stella , only runs 15 minutes.

It’s camp, bloody and pretty purposeless but it’s an idea that would benefit from further development. It’s on YouTube  to celebrate Pride Month