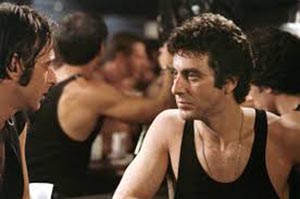 CONTROVERSIAL because its depiction of the S & M leather scene in the Manhattan meat-packer’s district of New York was first supported then condemned by the local LGBT+ community. Their concern was that it gave a very negative and twisted view of one branch of the queer community.

They needn’t have worried as the film was not a box-office success. Based on a true story of a series of vicious knife murders of gay men, particularly in the cruising grounds of Central Park, the film follows uniformed cop Steven- played by Pacino – as he goes undercover and assumes a leather-clad identity, mingling in the many fetish and sex clubs that then existed on the Lower East Side.

By today’s uncensored standards, it is still quite shocking in its full-on club scenes but the real people playing in the film really don’t seem to be having that good a time, lost as many of them are on substance usage.

The killer, who we see several times, continues to outwit the police and Pacino follows false lead after false lead, with devastating effects sometimes on those innocent men who are beaten up and interrogated as suspects.

Throughout it’s difficult to work out what Pacino’s haunted equivocal character thinks though he is clearly disturbed by what he sees, and this seriously jeopardises his hetero love-life with his wife.

In most club scenes he has a faraway look, and though we see him go with guys into the cruising areas we have no idea whether he follows through with sexual activity.

In the end, the killer may or may not have been caught – it’s not clear. After capture and arrest, there is a further murder and of someone very close to Pacino’s undercover existence. So Friedkin leaves us hanging thinking that maybe the cop ended as a copycat killer. The film ends with a strange reunion between cop and wife where again Friedkin drops a finale bombshell in front of us.

What is salutary to consider is that it must be true that many of the leather-clad muscular guys with droopy moustaches who inhabit the club scenes probably succumbed within the next decade or so to the Aids tragedy that beset the Greenwich  Village community and further afield.

Cruising is distributed  by Arrow Video and will be released on August 19.