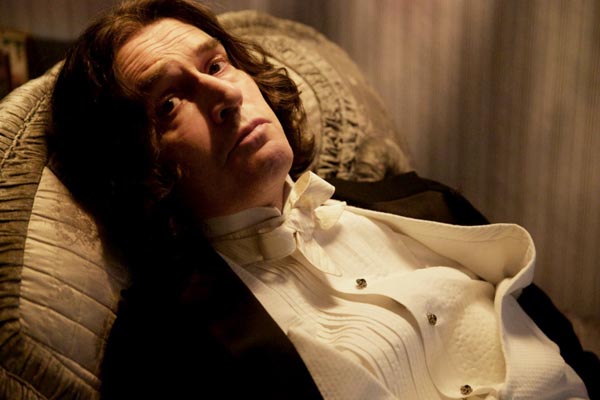 The Happy Prince, written and directed by, as well as starring, Rupert Everett, opens in cinemas across the UK on June 15.

Its UK premiere is set for March 28 as part of the BFI Flare: London LGBTQ+ Film Festival, following world and European premieres at the Sundance and Berlin film festivals.

The final years of Oscar Wilde, and the ghosts that haunted him, are vividly evoked in Everett’s directorial debut.

Building from his own 2012 lauded stage portrayal of Wilde in David Hare’s The Judas Kiss, Everett physically and emotionally embodies the literary genius as he lives out his last days in exile in Europe, in a performance described by critics as “flawless” and “the best thing Everett has done”.

The film opens in Paris, where Wilde, by now in his forties, penniless and in poor health, is still reeling after being imprisoned in England for his love affair with Lord Alfred ‘Bosie’ Douglas (Morgan). Out of prison but a pariah, Wilde swings between grief and a determination to wrest whatever pleasure and beauty he can from the time he has left. His body ailing and heavy, his mind spinning, he survives by falling back on the flamboyant irony and brilliant wit that defined him.

Everett’s Wilde is tortured but determined to remain true to himself. His thoughts are filled with love and betrayal and permeated with those closest to him: Bosie, his literary agent Robbie Ross (Edwin Thomas), his great friend Reggie Turner (Firth) and his estranged wife Constance (Watson).

As the film travels through Wilde’s final act, and journeys from England to France and Italy, desire and loyalty face off, the transience of lust is laid bare, and the true riches of love are revealed.