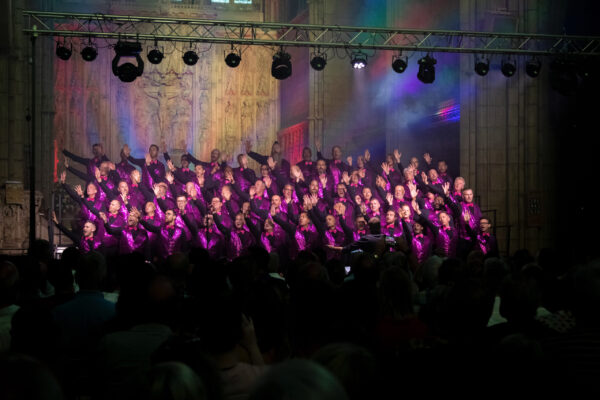 After sell out shows at this year’s Brighton Fringe, and last month’s renewed Brighton & Hove Pride event, Brighton Gay Men’s Chorus are about to embark on a ‘mini tour’ of festivals in locations both close to home and further afield.

Known across their home city for flamboyant shows, impressive harmonies and the ability to charm crowds of all shapes and sizes. The choir is staging one-off festival performances in Hurstpierpoint and Barcelona.

As part of the opening night’s offerings, the chorus will be performing their Simply the Best show at Hurst Festival on Saturday, September 17, which will feature a selection of old and new favourites, interspersed with solos and smaller group numbers. It’s a chance for audiences to experience music spanning seven decades. From Madonna to musicals and Disco to Disney – the show really does have it all.

The following weekend will see the guys packing up their glitterball and jetting off to sunny Barcelona after receiving a special invite to perform at La Mercè – Barcelona’s biggest outdoor festival – on Saturday, September 23. The international programme of events will see them performing an open air concert to thousands of festival goers.

Dr Joe Paxton, the Chorus’ Musical Directors, added: “We’ve got a fantastic line up of songs prepared. The Hurst Festival show takes the audience on a journey of musical moments. In Barcelona we’ll be doing everything we can to keep the party vibe going.”

Simply the Best, the Hurst Festival show is at Holy Trinity Church, Hurstpierpoint is on Saturday, September 17 at 8pm. Tickets can be purchased HERE

The show in Barcelona is in conjunction with Barcelona Gay Men’s Chorus, it will take place on Saturday, September 23. More details about La Mercè are available HERE