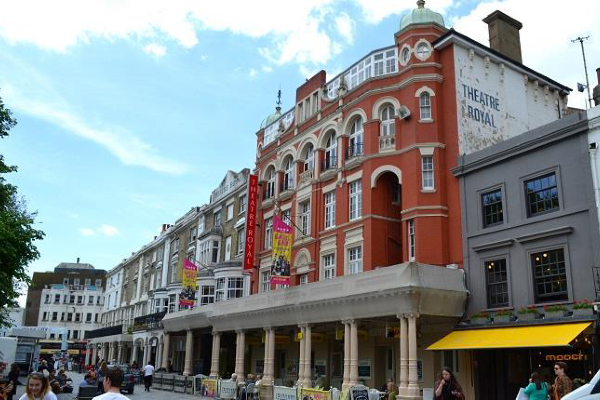 I was privileged to be invited to tread the boards at Brighton’s Theatre Royal as it made final preparations for full-time opening after the lockdown.

I was allowed to go behind the scenes and sit centre stage, looking out to its marvellous tiered auditorium as part of Director John Baldock’s unveiling of its season up to New Year 2022.

And what a season it is! With 13 big-name shows to present, owner Ambassador  Theatre Group  kicks off with Susan Hill’s spine-tingling ghost thriller The Woman In Black (30 August- 4 September), followed by Dirty Dancing, boasting no less than 35 hit songs, including The Time Of My Life. It runs 7-11 September.

Heathers The Musical, with its teen murder plot plays from 26-30 October. The original country house thriller The Cat and the Canary stars acting royalty  Marti Webb and Britt Ekland from 1-6 November.

Then it’s a comedy fortnight with David Williams’ Gangsta Granny (10-13 November), followed by The Play That Goes Wrong – which does what it says on the tin, from 15-20 November. More comedy follows with the farce Groan Ups following a group of anarchic 6-year-olds into adulthood, (23-27 November).

Then it’s cult time with the thrilling, raunchy Rocky Horror Show and your chance to dress for the occasion ( 29 November-4 December). And then as a Christmas treat and to see this rather forgettable year out, there’s the wonderfully uplifting musical Everybody”s Talking About Jamie, starring the absolutely extraordinary Layton Williams as the schoolboy who wants to wear a dress to his school Prom. Co-starring RuPaul winner Bianco Del Rio ( 7 December-2 January).

The staff of the theatre have also kindly shared with Scene magazine this exhibition (below)  of their  thoughts of closing and about lockdown and their joy at re-opening.

And welcome back old friend for many happy hours of entertainment. Ticket details at atgtickets.com