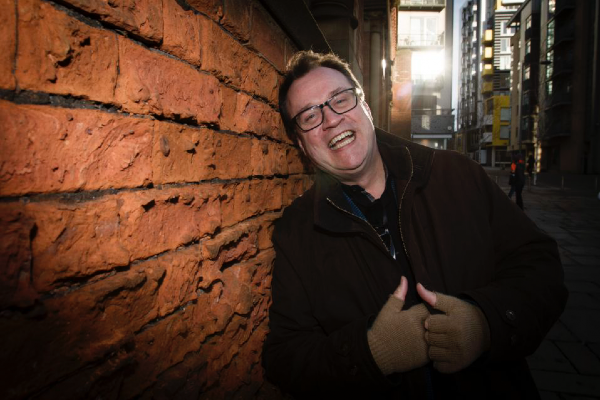 It’s A Sin creator Russell T Davies traces his great storytelling ability back to his Welsh childhood , his teacher parents and the chat he picked  up when his family became pub landlords.

“My father told me I didn’t have to do anything I didn’t want to “, he says referring to the young Russell’s lack of interest in rugby – a national religion. It’s the beginning of a captivating 90 minutes with ex-Corrie star Julie Hesmondhalgh in a deserted Hope Mill Theatre , as part of the annual Turn On Fest of LGBTQ+ events.

Russell admits he’s gone back to illustrating – his first love before writing – and it’s obvious that his amazing skill to visualise his plots comes from those early days of cartooning . He has nothing but praise for his days at West Glamorgan Youth Theatre , which he was active in from 12 to 21 years of age . He describes it as full of gay camp friends : “ but it wasn’t sexual at all “.

“ I started writing plays there – that’s who I am now because of that. It opened my mind and imagination.  As a child I was always in front of the tv – well past the 9pm watershed and I was allowed to watch Play For Today in the 60’s and 70’s and Dr Who endlessly – the Cybermen were burned into my memory at age 4. From 15 to 18 I walked  a mile home from school every day and made up Dr Who stories in my head “, says the writer whose dream eventually came true to write the show.

His first tv job was on kids’ programme at BBCWales – the child participants included Ant from Ant and Dec and Chichester Festival Theatre artistic director Daniel Evans. One day he was asked to write the show’s script  and so it all began .

Moving to Granada TV in Manchester in 1987 he says they were golden days in the Entertainment Dept – with shows like Stars In Their Eyes, You’ve Been Framed and ofcourse Corrie. He started to introduce gay characters to plots , including a childrens’ show . He saved like mad – still does – so he could become a full-time writer . “I still save so I never have to do a job for the money “ .

Of his ground-breaking series  Queer As Folk, and everything that followed it, he says he thinks in dialogue all the time “ I hear it and see it written down in my mind . Dialogue comes out automatically and constantly . It’s odd  : a million scenes are in my head “ . The final scene of current hit It’s A Sin was in his mind for years. “I can edit stuff and dismiss it in my head’, he says, believing his first draft should be capable of being broadcast.

Queer As Folk came out the same year Julie Hesmondhalgh first appeared as the Trans character Hayley in Corrie. Julie says: “ It was revolutionary and she had to be an angel – there was a responsibility to be representative with LGBTQ+ characters “, she says and Russell agrees.

On the controversy over his comments on the need to have gay characters played by gay actors , he feels misrepresented. He says it was important  in It’s A Sin to have truth and authenticity. “ Gay actors all the time tell me they don’t get fairness . There are a small number of gay roles and so the odds are against gay casting . In movies, there are no gay stars who command big fees , so they don’t get cast because they don’t bring financial backing into the film. Strong leading roles for gays, women, Black and Trans people don’t exist. The aim is to get to a better place “.

On his AIDS-era drama It’s A Sin he says “ No-one expected it to be a success, including the Channel 4 bosses “. Asked why it was he says: ‘ it’s the cast – they are magic on the screen. I thought I was writing as a matter of record and it was a big shock the amount of people who didn’t know the AIDS crisis happened like that . There’s anger and joy – I wanted it to be joyful”.

While he’s had huge successes he also admits to failure – Channel 4’s Cucumber and Banana spring to mind : “ Cucumber just didn’t click – maybe because it was about gay middle age . It’s an odd piece of work but I’m immensely proud of it. Years and Years died a death – it was the height of Trump , and it was a drama about a populist angry world : it’s a tough business “.

Julie  asks what he is most  proud of. “ Queer As Folk – it changed my life and doors were open to me because of it. Oh and Dr Who was a gift to the world “.

For other Turn On Fest events go to hopemilltheatre.co.uk

Queer As Folk , It’s A Sin, Cucumber and Banana are  on all4