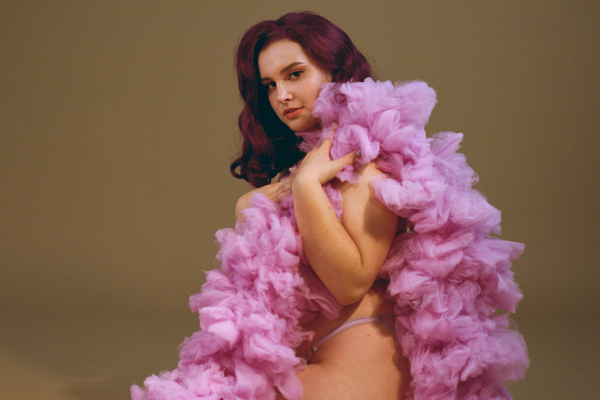 Big wigs, lavish costumes and plenty of skin in the game. Ebullient burlesque performer Violet Delights strips down the essence of the art for Jaq Bayles

Burlesque is a performance art form that, according to its most famous advocate Dita Von Teese in Burlesque and the Art of the Tease, has its origins in Ancient Greece as “bawdy satirical satire”, and was also popularised in the States where it was otherwise known as striptease.

Today it most commonly offers some sort of combination of satire or comedy, highly stylised character creations, song and dance and lavish costumes, which, of course, are most likely to be shed along the way.

And it’s growing in popularity, with burlesque nights established across the UK. But what attracts people to the notion of getting their kit off in front of an audience – something which is the stuff of actual nightmares for many – and why is it so attractive to queer audiences?

Violet Delights has been performing burlesque since 2019 when she joined the burlesque society at Nottingham Trent University with a view to taking it up as a hobby and meeting new people. But she got “bitten by the bug” and it’s become a much bigger part of her life.

So how did that tentative step into an unknown world evolve into a full-blown act?

“At first you think ‘I could never do that, I could never get on stage’ – then you want to do it all the time. I moved to London and the burlesque scene was so welcoming and I was able to develop my burlesque personality. I like to combine the traditional glamour elements of classic burlesque and incorporate the drag elements, then also put a bit of a comedy twist on it.

“I really enjoy exploring typically what you would expect from women and femininity and turning it on its head. There’s definitely a queer aesthetic to what I do. The drag aesthetic inspires a lot of what do – I wear a lot of big drag wigs.

“Before burlesque was what you’d expect it, as from Dita Von Teese – the glamour, the striptease – way before that it was very political and satirical and had a lot more to do with the queer community than you’d expect, and now it’s definitely going that way again.

“The cabaret scene generally is really so intertwined with the queer identity – cabaret sort of belongs to the queer community.”

Burlesque performers tend to adopt a variety of personas along with the costumes to fit (Violet doesn’t make her own costumes, preferring to “leave it to the professionals” but does do a lot of customising, particularly with rhinestones). Among her personas has been a ‘50s housewife, although she has shelved that one, so how does she decide what depictions of femininity to portray?

“I really enjoy exploring typically what you would expect from women and femininity and turning it on its head. There’s definitely a queer aesthetic to what I do.”

“Throughout my life I’ve found it quite hard to feel sexy or feminine and had a quite complicated relationship with my body where I didn’t really like it. I didn’t realise how much burlesque would change that. Burlesque is so good for making you appreciate every single body, including your own. So many of the massive names in burlesque don’t have the typical body you would see on TV or in magazines.”

My acts really celebrate female sexuality in all its forms. I have an Eve act, from Adam and Eve, looking at how a woman was blamed for something a man did and it’s sort of an FU to that basically, Eve reclaiming her sexuality and becoming the snake, becoming the sinner and not caring.”

Among new personas in the pipeline is an ode to the ’90s runway models who projected “such a powerful, strong personality”.

Violet adds: “I always try to find ways to explore femininity and sexuality in different ways in my act. I really enjoy looking at women in the sense they can be powerful, vulnerable, they can be demure, they can be innocent, they can be a siren – they can be all of that and more.”

A “typical” burlesque audience from Violet’s point of view is “people looking to have a good time and a lot of fun”. And many from the cabaret community can be always be found in the audience. “They always support each other, so you get burlesque dancers, pole dancers, drag queens. I’d say if you want to break it down to groups and their identities, it’s a lot of girls out with their friends, a lot of the queer community. The smallest portion would probably be straight men and they are usually just there supporting their girlfriends.

“Some shows are specifically for the queer community. There is one called Greedy just for bisexual performers – I think it’s a great turn on the name.”

With drag having become so mainstream now, is burlesque going to go the same way?

“Burlesque ebbs and flows depending on what’s happening politically and socially in the world. It kind of goes underground and above ground in the same way that drag does really. In the 2000s it became bigger again and now it’s massive – nowhere near as celebrated as drag is at the moment, but at a lot of drag shows you’re likely to find burlesque too. You also get burlesque performers that are drag queens – it’s called draglesque and they are as much drag queen as they are burlesque performer. Some acts might do drag and not burlesque and some are really burlesquey – usually it’s a great blend of the two and it’s amazing.”

How would Violet define burlesque?

“Obviously it’s got its roots in the striptease element, but it’s really difficult to define because it sort of transcends all the categories of being a dancer or being a performer – it kind of blends everything. Depending on the kind of performer you are, you might do comedy and almost no dancing, you might perform with no stripping, or you might do just stripping and no dancing. Typically there’s an element of shedding garments.”

Does it cover all age ranges or is it mainly the preserve of younger performers?

“It does cover all ages and like anywhere in society you’re going to get ageism and ableism and that sort of thing. But there so many great areas of burlesque that have been carved out by older generations or disabled performers to really cater for them and make sure they’re seen. It’s a super-inclusive community. There’s a really great show in Hastings by Pupin Devert called the Solid-Gold Silver Show for performers over 50, and they are just as incredible if not more incredible then the younger performers because they might have been doing it for ages.”

For her day job, Violet works at Coco de Mer adult boutique – so is there a crossover with her love of burlesque and her work?

“Definitely. It’s my attitude towards sexuality and my own sex positivity. My opinion when it comes to sex is if you like it do it, if you don’t, don’t – as long as you’re not hurting anybody, go for it. My own attitude towards sex definitely informed me wanting to work at the store and I enjoyed taking control of their social media and putting that message out there on their behalf.

What sort of messages have you been putting out?

The company is very much for women by women and we are all about women owning their sexuality, so we recently had a collaboration with Helena Christensen, the ‘90s model. She’s a photographer these days and she’s now 50 years old and still looking as gorgeous as ever.

We wanted more older, middleaged representation in lingerie because you almost never see it. We got her to self-shoot a campaign to try to capture the ultimate female gaze. The messaging was about that and that women should be wearing lingerie for themselves over anyone else and owning their sexuality over anyone else. Your relationship with yourself is the one you’re going to have the longest.”

What have been the biggest sellers recently?

And finally, can anybody take up burlesque?

“When people find out I do burlesque – because you wouldn’t know it from knowing me in regular life as I’m fairly normal and unassuming looking – they are always excited and the first thing they say is ‘oh I want to do that, I wish I could do that’, and I just say go for it, why not? You can do online classes – in the pandemic they became quite popular, a stress-free way to get involved from the comfort of your own home. So yes, anybody can do it but not everyone would want to – it’s getting naked on stage, so it’s a lot of people’s worst fear.”

Violet’s pick of LGBTQ+ burlesque shows to look out for:

And her top Brighton-based shows are: