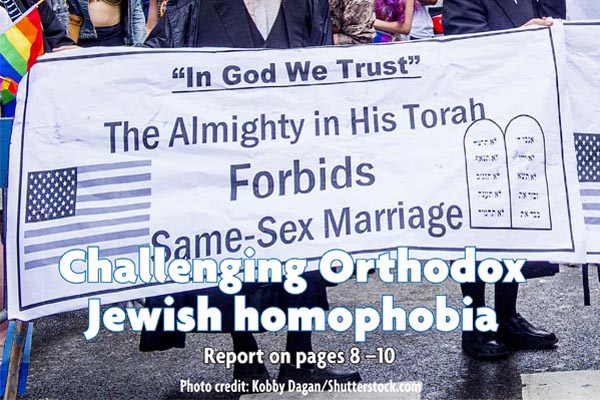 In the latest issue human rights campaigner Peter Tatchell writes on the importance of putting LGBT rights on the agenda of the upcoming Commonwealth Heads of Government Meeting (CHOGM), which takes place in the UK in April, 2018.

To date, CHOGM leaders have refused to discuss or support LGBT issues and concerns, and Tatchell insists that the time has come for them to start taking the issue seriously.

The magazine’s cover story examines how young Orthodox Jews are gaining ground in combating homophobia in Judaism, and also carries a report on how, despite using despicable anti-LGBT scare tactics, Christian extremists in Australia were dealt a considerable blow when gay marriage became law in Australia last December.

The magazine also carries an interview with Terry Sanderson, President of the National Secular Society, who is dealing with a cancer diagnosis.

Other issues covered include an astonishing decision by Bermuda to reverse gay marriage legislation just months after same-sex unions were approved; the banning of US hate preacher Steven Anderson by Jamaica, and the efforts being made by comedian and TV personality David Walliams to combat homophobia and transphobia via his popular children’s books

There is also news that a ‘temple’ created in New York for Oscar Wilde is due to come to London in autumn of this year.

The current, as well as past issues of the magazine can be downloaded in pdf format from The Pink Humanist website.

To download the magazine as a pdf document, go to ‘Archived Issues’ then ‘Back Issues’ and place the cursor on any cover. In the top left corner of the cover you will see “click here to download pdf”.

Additionally, individual articles can be accessed directly from the site’s home page. These contain all relevant hyperlinks.

The Pink Humanist is an online magazine published by the UK LGBT Humanist charity the Pink Triangle Trust (PTT).

It features topics of special interest to those who identify as atheists, freethinkers, humanists, secularists and sceptics in LGBT communities and those who support them. The magazine’s editor is Barry Duke who also edits the Freethinker (the Voice of Atheism since 1881).