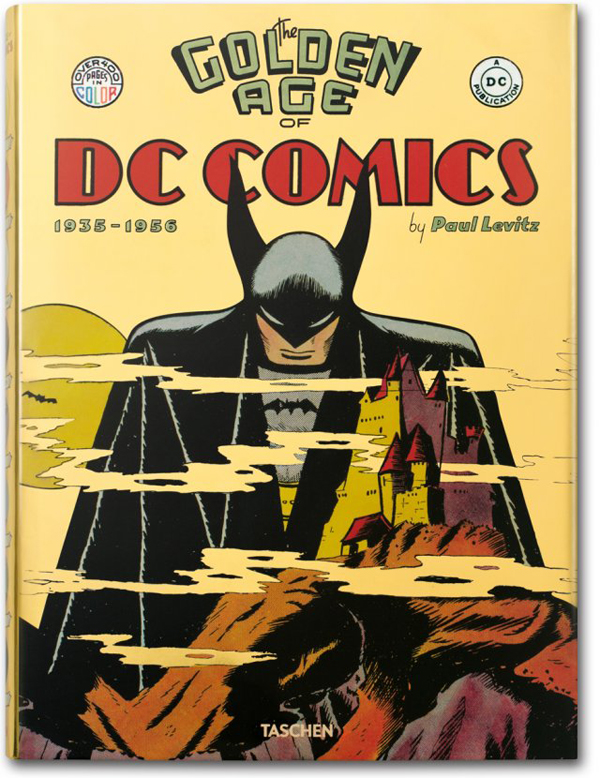 This book chronicles the first decades of the DC comic book publisher, which has brought the world Batman, Superman and Wonder Woman. This excellent comprehensive compendium of the DC comic early years should be on your gift list for any LGBT comic fan geek you might know.

TASCHEN’s ongoing series covering the DC Comic world follows the development of the creators of these well-loved superheroes year by year. This book is an updated and slightly smaller version of the huge extra large 75 Years of DC, it might be smaller in size but it’s packed with thousands of illustrations, covers, film still, photographs, tie in’s and collectables, some you’ll know and love, some you’ll covert.

Levitz is the best kind of author, as he not only loves this stuff but also has worked in the DC world for decades and his warm expertise shines through in a series of accompanying essays.  There is also an interview with artist Joe Kubert of Sgt Rock and Hawkman fame.

There was a collective ‘ohhh’ in the office when I opened this book and it’s one of those coffee table books which will never gather dust, being as much fun to open at random as it is to sit down for a cosy afternoon and slowly work your way thought it’s evocative and deeply informative pages. There’s a huge LGBT interest in comic books, and they speak to us in deep metaphorical ways of being ‘other’ and having a secret, apart from the high camp of it all too, this book is a pleasure to read and I enjoyed every page of it.

Superman’s story, and those of Batman, Wonder Woman, and hundreds of other DC Comics characters are all told in The Golden Age of DC Comics. This volume traces the company’s first decades, from its pulp origins up to the comic book burnings of the McCarthy ‘50s. There’s a huge amount of extra cool stuff too from comic covers to related films, some I’d never seen before.

Taschens commitment to high quality publishing and well researched content allows this book to become one of the definitive works on this era of comic development. This hardcover book with more than 400 full colour pages of informative delightful presented historical artwork is one of the best books I’ve come across about the DC years.

The editor – Paul Levitz – is a comic book fan who has worked as editor/publisher of The Comic Reader, editor of the Batman titles and others, writer of more than 300 stories—including an acclaimed run on Legion of Super-Heroes—and a DC Comics executive, finishing his 38-year stint with the company as President and Publisher.  You can’t get a better pedigree than that.

For more information or to buy the book visit Taschens website here:

The Golden Age of DC Comics