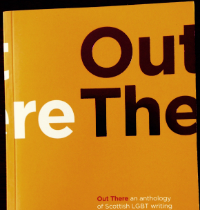 This is a bold and challenging anthology of LGBT writing featuring some of the UK’s leading writers; the majority of them Scottish by birth or having chosen to make their homes and lives there.

In the year that Scotland voted to not choose independence from the rest of the UK and kicked off a greater debate about the Union and what it is, and what it means to the rest of us in the UK, Freight Books brings a new and definitive anthology of poetry and prose writing from Scotland’s leading and emerging LGBT writers, including the likes of Ali Smith, Louise Welsh, Jackie Kay, Ronald Frame, Toni Davidson, Kerry Hudson, Val McDermid, Damian Barr and many others.

The writing is provocative, thoughtful, moving and as fully-charged with energy as one would expect from Scotland’s celebrated community of LGBT artists. Edited by novelist Zoe Strachan this book is a broad cross section of story and poetry from a myriad of viewpoints, some fondly looking back, some fiercely forward but all threaded through with a true voice.

As a Welsh gay man myself, living in the bubble of Brighton, but who’s sisters left for the Shetlands and gave birth to a huge clan of Scottish people who are now my family I’m as complex and British as most of the rest of us.  It’s a fun book to read, plenty of divergent and diversity woven into the warm tapestry of Scottish life.

Living in huge Hetro England this mass of Sassenach’s can often overlook and take for granted this authentic gabble of voices that make up the communities of the United Kingdom. The LGBT community is more diverse than most and the English Horde take for granted their own dominant viewpoint. It’s refreshing and welcome to read such punchy, vibrant stuff from North of the Border, and most of it not anti-English in the slightest but firstly Scottish.

There are something’s that only a Scottish eye can see, and Scottish heart can feel and it’s great to have that translated into words that the rest of us can read, but there are also some universal Scottish, Welsh or Irish LGBT/Queer experiences in this Island Nation of ours that are the same.

Whether you come from Glasgow, Swansea, St Helier, Derry, Galway, Lerwick or Porn Erin you will recognise and sense this poetry and prose as part of your own familiarity. The hesitancy and fear marked in many of the stories is universal to us as LGBT people.  English ironically enough is the language that binds us closer than our often lumpen politics and imbalanced history and this collection of new LGBT Scottish writing is as fun, frothy and fantastic as it is sombre, sober and sonorous, it speaks directly to us, as LGBT folk, but not pre-independent Scottish queers as is stated in the preface, but from an authentic, important Queer British perspective.

To read more from the wonderful editor of this anthology Zoë Strachan, click here:

This is (rather unbelievably) the first anthology of its kind in over twelve years (since Joseph Mills’s Borderline in 2001) so full marks to Strachan for bringing it to fruition  and it’s well worth waiting for. Let’s hope our LGBT creative friends north of the Border don’t take quite so long to churn out the next collection.

From all good bookshops.