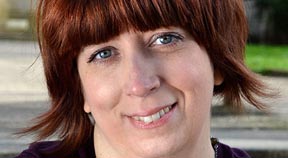 The first anthology of Scottish LGBT writing published in twelve years, and only the third in Scottish literary history.

Freight Books is publishing a new and definitive anthology of prose writing and poetry from Scotland’s leading and emerging LGBT writers, edited by Zoe Strachan, in September.

Following on from Glasgow’s ‘Gay Games’ and the now famous Glasgow Kiss, this is the first anthology of its kind in over twelve years.

Out There is the perfect barometer of just how far Scottish LGBT writing has come in that time.