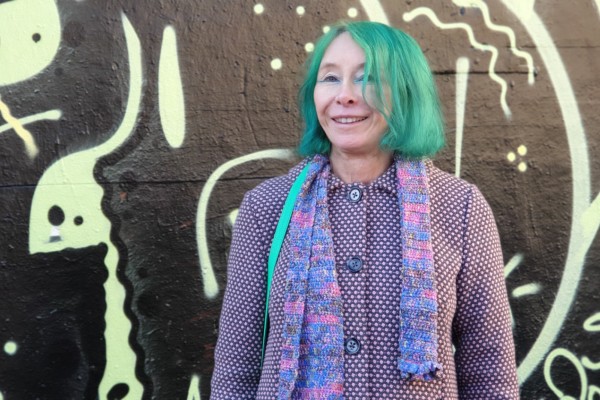 No Fear No Shame

When did you start writing poetry?

“I’ve written for as long as I can remember; when I was three, scribbling cloud shapes in the margins of a fairy-tale book and telling my mum I’d written her a poem. I had hopes of writing for film at Elstree Studios but circumstances diverted me into nursing which I loved. I was drawn back to writing after unplanned retirement, lacking confidence to share or perform until I came out and moved to Brighton this unleashed a whole new sense of freedom and self-worth.”

Why focus on a career in writing?

“To say I’ve a career in writing would be overstating the situation a little, more accurately a lifestyle commitment. Few poets seem to make a living from their poetry. I discovered I could relate to people, move them, offer an insight into another’s world, even make them laugh. To stand in front of people with just words, to feel their response is a wonderful and sometimes terrifying experience.”

How have you evolved as a writer?

“My writing has changed enormously in the years since I moved to Brighton. My earlier stuff is discarded. I’ve become more open and honest. I have more conviction and I feel I‘ve found my own voice and style. There are so many poets to admire in Brighton who inspire me to be better.”

Do you think poetry has purpose?

“Oh, I do so hope poetry has purpose or we are all wasting our time, there is so much it CAN be. Someone said to me: ‘Poetry’s not enough for you is it? You want to change the world.’ Ambitious perhaps, but to touch a few hearts and minds would be good.”

What have you experienced through writing?

“I love it when people talk to me after a performance, especially if it’s positive or warm feedback. Once a middle-aged woman hugged me and said: ‘Thank you, for the first time in my life I feel good to be a woman.’ And a man said his teenage daughter who was in the hall had said: ‘That’s how I feel dad, exactly like Alice.’ Up until then she had been unable or unwilling to discuss her feelings with her parents. On both occasions I was (delightedly) stunned. They were pretty special moments.”

Why are you a poet?

“I don’t know why I am a poet. I’m still not certain I am in that it doesn’t earn my keep and there are fabulous poets around of whom hardly anyone hears. I mean poets who write and recite for more than just producing a nice poem. I’m feeling a little abashed to be in this position as people might ask: ‘What do you know about anything?’”

Do you have a particular process to write?

“My method is pretty ramshackle. I write in my head while ruminating on something I care about. I scribble down what random lines have forced themselves into consciousness. I will then type out my notes. Sometimes they’re already forming themselves into something that sounds like me. I print out the words, carry them with me, read and re-read, revise- sometimes change one or two words and reprint maybe 10 times finding quiet places to recite aloud until I know it is authentic.”

Where do you find your startling metaphors?

“Poetry depends on the use of metaphor and I do love metaphor when it’s so exquisitely natural, it slips in under the radar of self-consciousness, crashes your emotions… But I don’t give them much thought, if any. I will now. I actively dislike similes which might seem strange when one of my poems, Clara Bow, is one simile after another.”

Where is the flint in your soul?

“Oh blimey, I really don’t know. When I was about nine or 10 a friend threw a huge chunk of jagged flint which unintentionally hit my head and split it wide open. It’s unforgiving stuff, sharp, makes great arrow heads when skilfully worked. When my daughter Beth was 15, at a music festival, in the stampede during the Chumbawumba set she was knocked to the ground, trampled beneath the feet of the unconcerned mob. Instantly I transformed and waded in, throwing punches, throwing people aside, kicking… anything to get to Beth and pull her up. I sometimes, often, feel like that when confronted with injustice, betrayal, persecution, abuse, especially of children. There is so much of that going on that you could easily be swamped with impotent rage, or try to shut yourself off. I think I’m a bit of a coward, need to be braver.”

Any advice for new writers?

“Humble advice but be true to yourself and, if you can, believe in yourself. I love the energy and honesty of some young poets. I do my best to encourage them.”

Who moves you to tears?

“VG Lee moved me to tears while I was reading a short story in Oh You Pretty Thing. She is a fabulous writer and can take me from laughter to tears in one line. Some of my own poems have brought tears, is that a bad thing to admit? If I’m totally immersed in making the poem when I first read it to myself it comes as a shock. They can catch me unawares during a performance too.

Alice has a new book coming soon and will be accompany its publication with appearances in Brighton, follow her on twitter to find out when!