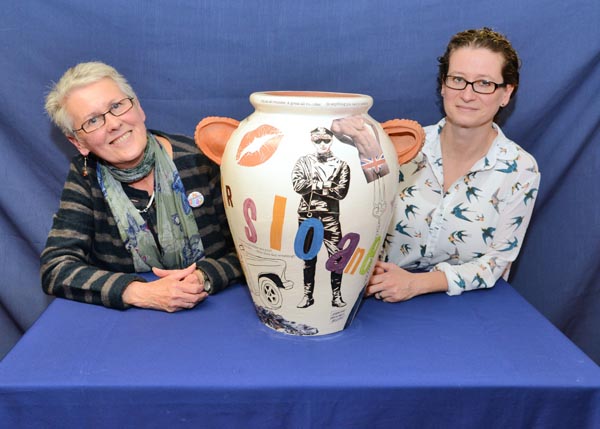 The event took place on Friday, November 14 as part of the University’s Literary Leicester Festival celebrating the city’s literary legacy.

The pot reflects Entertaining Mr Sloane’s central themes and features quotations from the characters. Its ‘Ortonesque’ style mirrors the author’s trademark combination of humour and horror. For example, the handles consist of a set of false teeth.

Dr Emma Parker of the School of English, who produced a 50th anniversary edition of Entertaining Mr Sloane earlier this year, said: “This wonderful pot not only commemorates the play but will ignite new interest in Orton’s work and entice people into the Orton archive.

“Come along and be the first to see the latest addition to the library’s growing collection of contemporary art and celebrate the play that launched Orton’s career.”

The Orton archive includes manuscripts, letters and other original material written, compiled or collected by the Leicester-born John Kingsley (Joe) Orton (1933-1967), plus correspondence and memorabilia received and collected by members of the Orton family.

It includes scripts and drafts of plays (published and unpublished), correspondence (mostly with his agent, Peggy Ramsay), a diary of his stay in Tangier, scrapbooks and press cuttings, programmes, photographs and personal memorabilia of both Orton and his lover, Kenneth Halliwell.

Also included is the screenplay of Alan Bennett’s Prick Up Your Ears, based on the biography of Joe Orton, written by John Lahr.

The Archive was purchased from the Orton Estate in 1997.

Literary Leicester takes place from November 12-15 is a celebration of the written word and will be delivered by a multitude of writing talent over four days, including author Will Self, Leicester children’s writer Bali Rai and Leicester-born former children’s laureate Anne Fine, author of the novel that became the smash-hit film, Mrs Doubtfire.

The star-studded collection of wordsmiths will also pay tribute to the late Leicester author and Adrian Mole creator Sue Townsend, who died in April, as well as engage in discussions about Charles Darwin, Evelyn Waugh and the Canterbury Tales.