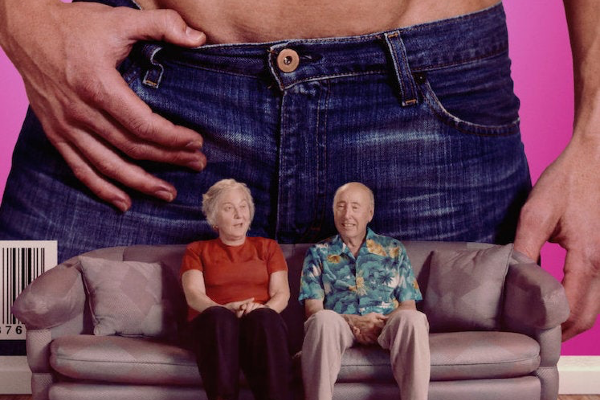 Barry Mason is an unassuming liberal Jew who just happened to invent a vital mechanism within dialysis machines that gave him a tidy living. And that’s irrelevant to this fabulously weird story except that when his income from the patent died, he had to find another job to keep his ultra-Conservative wife and their kids with food on the table.

There follows a story that you couldn’t make up. Karen had been a crime reporter on the Cincinnati Enquirer and met Barry at a Jewish singles party. Barry had gone into the movie business as a special effects man – working on Star Trek. When that also dried up he answered an advert by Hustler magazine owner Larry Flynt  who was looking for distributors for his adult magazines.

As Momma Mason says to her daughter Rachel , whose film this is , “ These are the videos that sent you to college “.

The exact nature of the business was kept secret from the Mason children and when they visited the store they were told to keep their eyes averted from the shelves and displays of sex toys. It’s delicious !

The film also details the aggressive prosecution which Barry faced under the Reagan regime for transporting what was considered obscene material across State lines. The more enlightened Clinton Presidency meant that Barry’s company rather than him was prosecuted  and all in the end was well in that sorry episode .

The central focus of the film is on Karen and her ability to compartmentalise her life – into the business “ its like selling apples from an apple cart “, her strong right-wing religious beliefs and her stable family life with 3 kids.

We might not understand how she can do it, and I’m guessing she doesn’t either. But she meets a major conflict head -on when her son Josh comes home from college and outs himself.

It’s a huge body blow – she is gay-friendly as all her staff are LGBT but having a gay son seems a bridge too far. Rachel quizzes her reluctant mother and we discover that she had to recalibrate her whole belief system.

Clearly in the end, love of her son wins out, and indeed for the last 20 years she has been a very public advocate and facilitator for PFLAG – Parents and Friends of Lesbians And Gays .

All in all a fascinating bit of history and as the shop finally shuts up , we get the  closing title song  “ Let me celebrate what you don’t understand. It’s where I get the strength to be who I am “ A good thought.

Circus of Books is on Netflix