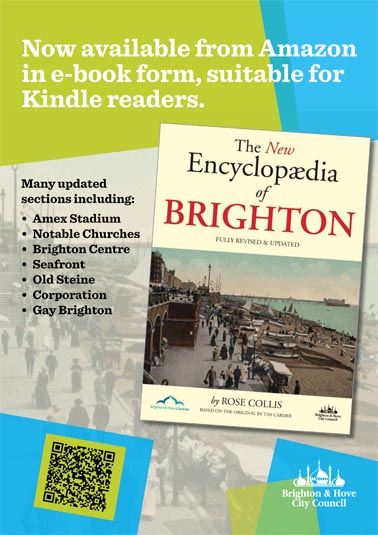 The New Encyclopaedia of Brighton is now available in digital format for the first time. The e-version has been updated with many new sections and more listings than before. A vibrant guide to the city’s history and current scene, the work features people and places alongside quotes and anecdotes for a fascinating insight into Brighton.

The e-version makes the encyclopaedia far more portable than its predecessor. The 2010 print version is A4 size, a coffee table favourite and weighs almost 1.5kg.

Now the 370 printed pages of A-to-Z listings have been transformed into a comprehensive digital reference source, as heavy to carry as the e-reader of choice. This new format gives people the opportunity to easily take a vast wealth of local information out and about around the city.

In 2010, local author and historian Rose Collis was commissioned to write the print version of New Encyclopaedia of Brighton for publication by Brighton & Hove City Libraries. Rose has researched and written the new 2012 content for the expanded e-version. Updated sections include the AMEX Community Stadium, Gay Brighton, seafront and the Old Steine.

“I’m delighted that, with the launch of the Kindle edition of the New Encyclopaedia of Brighton, the book will now be more accessible to readers throughout the UK and around the world, where there are many former Brightonians who retain a keen interest in this city and, in particular, to the many overseas visitors who come here every year. I have also welcomed the opportunity to update a large number of sections – for instance, the opening of the wonderful Amex stadium – and to make corrections to other sections. I’m particularly thrilled that the dozens of web links included in the 2010 edition will be accessible ‘live’ on Kindle readers.”

The digital release is suitable for Kindle and other e-reading devices. The e-version is available to buy online, providing access to more information than ever before at a lower cost than the print version. Amazon is selling the e-version for £8.04.

“Rose Collis’ reputation as one of the city’s foremost historians will rightly be enhanced by the publication in digital format of her best-selling reference book.  I am sure that this will be an essential download stocking filler this Christmas.”