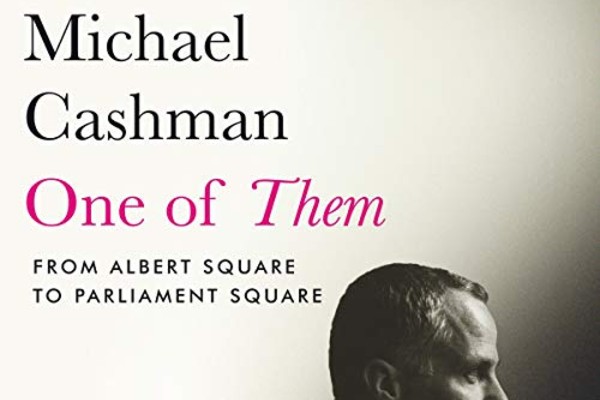 One of Them: From Albert Square to Parliament Square

Born in East End London, young Michael is spotted in a school play, cast in Lionel Bart’s Oliver! In the glittering West End.  That sets him up for acting on stage and screen into adulthood, achieving national fame as Colin in EastEnders, making television history as one half of the first gay kiss ever broadcast on a British soap for which he gets hate mail and bricks though his window.  He meets the love of his life, by chance in Butlins, Paul Cottingham, who would become his husband and partner of 31 years. Cashman then, with Ian McKellen founds and chairs Stonewall, fighting tirelessly for civil liberties all over the world before entering the world of politics and now sits in the House of Lords.

Told with warm humour and a delightful self-deprecating edge we learn of high tea in LA with David Hockney, flirting with Joan Collins and flying the rainbow flag over the Albert Hall with Elton John.  It’s not all glam and glitz though, Cashman shares some profound troubled grief in this book, harrowing and full of pain as he watched his adored husband die, and it’s these screamingly honest parts of the book which won me over to this showbiz memoir. There’s real heart here, of one man talking about his loss, the loss of a lover profound. I was moved.

One of Them it is an account of a life lived both left-of-field and firmly embedded in the heart of all that makes Britain liberal and good whilst keeping a beady eye on always striving to make things better by honesty and fighting the good, right fight.