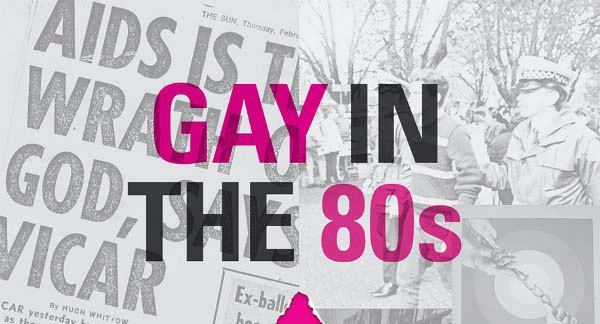 The 1980s heralded many challenges for LGBT+ people around the world and in his new book Clews examines these. The rise of the New Right in the USA, Section 28 which prohibited the promotion of homosexuality; the trial of Gay’s the Word bookshop in the UK and the continuing criminalisation of homosexuality in the majority of Australian states. Underpinning all of this was the unfolding of the AIDS crisis: a time when LGBT+ people realised that they were no longer simply fighting for their rights but fighting for their lives.

But it wasn’t all doom by the end of the eighties there had been real progress. Major political parties had LGBT+ rights in their manifestos, trades unions increasingly took up the cause and regional legislators introduced anti-discrimination laws and policies. LGBT+ people became more prolific in film, television, music and literature and the LGBT+ community grew significantly. The book also examines the dynamics behind these changes; some the result of prolonged campaigns, others stemming from the growing influence of the ‘pink pound/dollar’, others still a consequence of the growing anger at government intransigence to the AIDS crisis.

Gay in the 80s examines a number of the events and issues in the UK, USA and Australia, giving a comprehensive perspective of LGBT+ reality during this decade The book covers the broad political context of the 1980s and takes a comparative approach to events in these countries from Clewes personal experience.

Clews has lived this life and records it with candor, humour and an elegant  attention to detail, this book is another good example of why it’s so important that we write our own history, record our own triumphs, challenges, failures and hopes and keep an honest record of the events that have framed and formed the current LGBT+ world.

There is a superb supporting website to this book with lots of interesting details, content and reports, check it out, then buy this superb and important book.

Out now, for more information or to buy the book, click here: