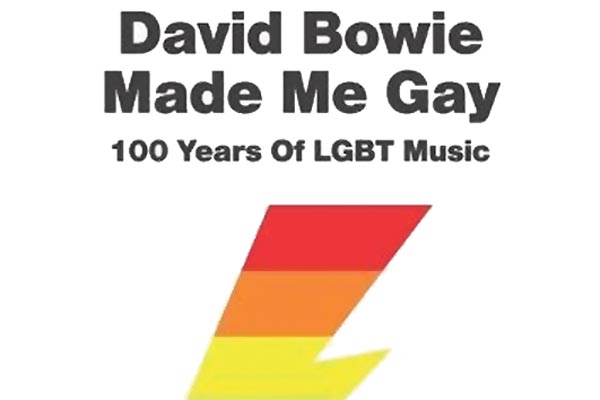 David Bowie Made Me Gay: 100 Years Of LGBT Music by Darryl W Bullock.

THIS comprehensive history encompasses a century of music by and for the LGBT+ community. Bullock has done some serious research but is also driven by a sense of the personal, the enlightening and the profoundly effecting, and as music is often the first place we learn to express who we are, recognises that this is a fundamentally important medium.
LGBT+ musicians have shaped the development of music over the last century, as well as providing a sexually progressive soundtrack to the gay community’s struggle for acceptance.
With the advent of recording technology, LGBT+ messages were for the first time at the forefront of popular music and Bullock examines how those records influenced today’s music. He shares stories of many musicians whose music hasn’t survived but who lived their lives to the fullest, in all their queer glory; from American jazz singers to 1930s German songs like Das Lila Lied (The Lavender Song), with its refrain “We are just different from the others” (probably one of the first recorded songs to directly reference and celebrate homosexuality).

He examines the almost forgotten Pansy Craze in the years between the two World Wars, when many LGBT+ performers were feted by royalty and Hollywood alike. The book is illustrated with unseen photographs and stuffed with info and insight on the glory years of burgeoning LGBT+ lives in the 1970s-80s, when the emergence of disco and glam rock gave birth to ‘out’ gay pop stars: Elton John, Boy George, Freddie Mercury and George Michael; and asks where we are today, and how much further we have to go.
Definitive, informative and challenging this is a must have for anyone interested in popular LGBT+ creative lives within mainstream culture.
Published by Gerald Duckworth & Co; £18.99.