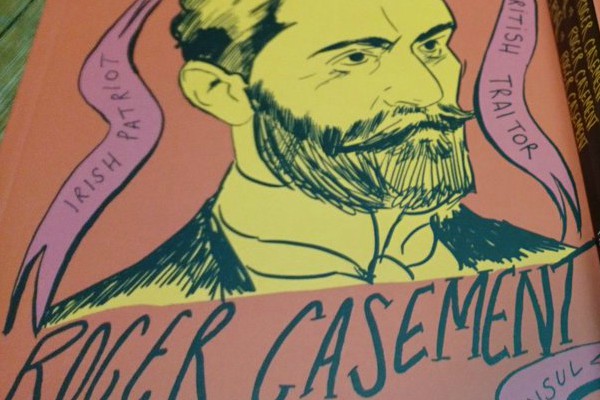 The Trial of Roger Casement

The life of Roger Casement: celebrated humanitarian and condemned Irish revolutionary is given this sparkling graphic novel treatment by artist and author Doran. We don’t hear much about Casement in England (for some reason…..shame perhaps?)  but he’s a true hero in Ireland and his outing all but sealed his horrible fate.

Casement was knighted by King George V for his humanitarian work in Africa and South America. Five years later, he was hanged for treason. The book charts the events that led a man renowned for his compassion to the noose. Doran’s absorbing narrative explores Casement’s downfall, from his efforts to secure German backing for an independent Ireland to his disastrous return home and subsequent arrest.

Based on his true life story; condemned as a revolutionary, imprisoned in the Tower of London (this was the 20th century!!) his sexuality exposed by the circulation of his private journals, and on his final day in the courtroom, he delivered a brave, impassioned speech that still resonates.

This graffic novel is a lovely labour of love but if you’re not too familiar with the times and history of struggle of Casements’ time then it would really be worth a little extra research, perhaps from an Irish author, then you’d get the full benefit of Doran’s precise narrative.

For more info or to buy the book see the publishers  website.