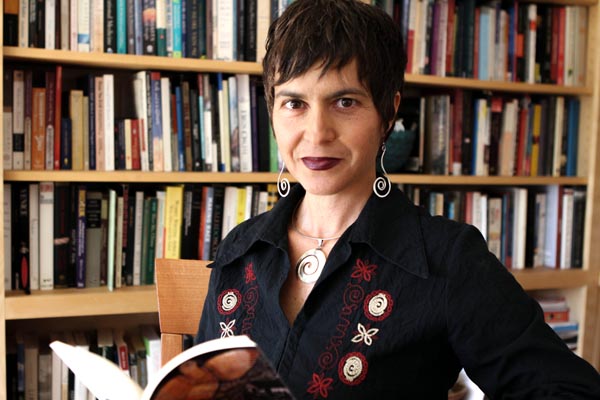 The festival takes place in Charleston, once home to the Bloomsbury group.

A human rights activist, Helen Klonaris’ early years were spent raising awareness around issues that ranged from capital punishment to violence against women to discrimination against LGBT+ Bahamians. She also co-founded organisations and journals such as The WomanSpeak: A Journal for Caribbean Women’s Literature and Art. Much published in journals and anthologies, with Amir Rabiyah she co-edited Writing the Walls Down: A Convergence of LGBTQ Voices, published by Trans-Genre Press, 2015. Her debut collection of short stories, If I Had the Wings, is just out from Peepal Tree press. It’s dynamite. These stories take your breath away, her award-winning story Cowboy has already had me in tears.

When she heard about the residency she wrote: “I was quite emotional when I found out… I’m an islander, and I like to think of short stories as small places where the possibilities for transformation are potent…These times need our stories, I think.”

I caught up with her by internet transatlantically:

HK: I’m speaking to you from a lesbian land collective in Mendocino… it’s pitch black and there’s a full moon out and I can hear a lone bull frog braying down by the pond…

MJ: You’re involved in too many amazing projects to mention, when do you manage to write as well?

HK: I like writing in bed. Maybe that’s because bed is so closely connected to dreaming and for me writing comes from that place, the unconscious. I’m intrigued by the way a story begins with a persistent image, and how I walk around with that image, just watching and listening, until it tells me where it wants to go and how. Writing is this dialogue between the conscious mind and the unconscious… the conscious mind asks questions, the unconscious mind sends pictures, sounds in response and then they are in this very long conversation that becomes a story.

MJ: You live between your native Bahamas and California now, right? How differently did you experience the LGBT+ communities there?

HK: Yes, when I first moved out to the Bay Area I felt as if I had missed a pivotal moment in US LGBT+ history, that somehow all the battles had already been fought, whereas, in the Bahamas, our communities are still emerging politically. There isn’t a great deal of visibility. We don’t have LGBT centres, or Pride parades, or large advocacy groups; we do have specific people who are spokespersons for the community, who are doing an amazing job of keeping LGBT issues in the public eye and ear. I was actually a founding member of one of the first out LGBT organizations in the Bahamas – the Rainbow Alliance, which sadly doesn’t exist anymore.

MJ: Can you say a bit more about why ‘these times need our stories’?

HK: I suppose I have always lived with a sense of urgency – a feeling that the everyday I was living in the Bahamas was so impacted by the legacies of colonialism and slavery, for example, that I could not pretend otherwise. I think I became a writer to talk back to ‘these times’. I was also a daughter of Greek immigrants, a queer Greek Bahamian girl growing up in a deeply religious community and country, one where you could not question the status quo without being told “God said so,” end of story. Well I didn’t think it was the end of the story, in fact, I thought, we need a new story. Lots of new stories to upset, upend, break out of these old stories and live something we haven’t imagined yet.

And now, here I am years later living in the US at a time when the leadership of this country is unabashedly calling us to build walls, keep immigrants and Muslims out, institute ‘law and order’ as a response to the continued police aggressions (and killings) of men of African descent, and ignore Indigenous rights, women’s rights, and on and on. What I’ve noticed in these first months of this leadership is the overwhelming feeling that people like myself are powerless. The machinery of the government is huge and rolling out and there’s nothing we can do about it. Except there is. A story may be a small thing. But it’s like the tale about the Emperor’s new clothes. It’s the child, small, young, closest to the unconscious who can see what is actually happening and says exactly what is needed to wake everybody up. That’s how I see short stories. And that’s why they’re so important right now, because we cannot afford to be asleep to the lies of power.

MJ: What has given you the strength to keep going?

HK: I come from an incredible community of writers in the Bahamas – poets like Marion Bethel and Lelawatee Manoo Rahming and Lynn Sweeting and Patricia Glinton Meicholas whose folk tale “The Gaulin Wife” so inspired my own story “The Dreamers” about a boy who grows wings and flies… so many others…they are my roots, they have been a tremendous part of the shaping of my identity as a Bahamian writer; their work remembers me to myself over and over again when I have despaired that as an island woman my life was somehow too small to matter. I know that isn’t true. Islands are the engines of evolution, I heard a scientist once say. And like islands, yes, stories are sites of extraordinary possibility.

MJ: What are you looking forward to at Small Wonder and what’s next?

HK: I’m looking forward to meeting other writers and to reading from my brand new book, meeting folks who are short story lovers… I’m looking forward to being on the land where Virginia Woolf walked and wrote, where her sister Vanessa Bell lived and loved and painted… I’d love to run into their ghosts in the garden. Now that If I Had the Wings is out in the world, I’m working on finishing a collection of essays – personal essays on imagination and whiteness and what it might take to transform a white supremacist consciousness. And creeping upwards through my unconscious is a novel, or what feels longer than a short story. We’ll see. This festival is giving me ideas and already there’s a new short story that wants to be told. Maybe it will show itself when I get to Charleston. I hope so.