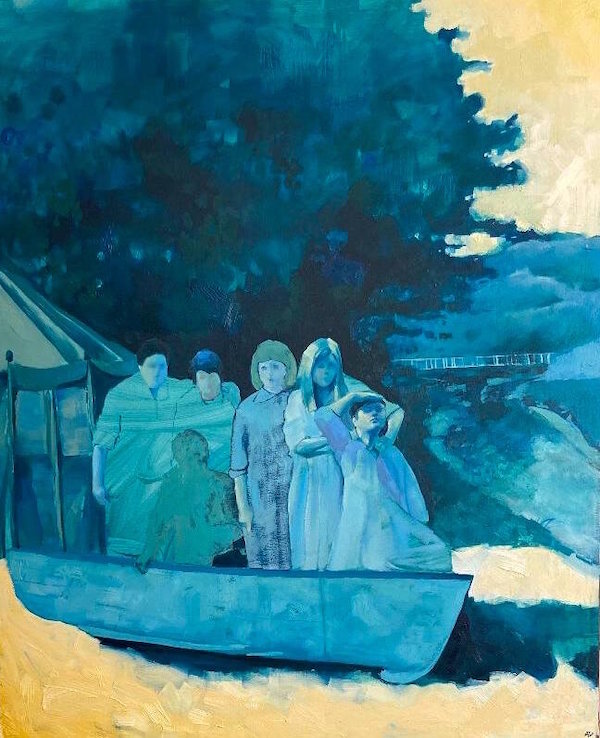 This month I am very happy to be able to introduce you to Amy Dury, a figurative painter who has had some notable successes in recent years.

Having been shortlisted for the BP Portrait Award in 2020 and been accepted for the 2021 Trinity Buoy Wharf Drawing Prize. Having appeared on Portrait Artist of the Year in 2021, for International Women’s Day in March the same year she was asked by the Tate to paint a livestream portrait session, where she painted a portrait of Cornelia Parker to an audience of 130,000. Amy is also Head of Art at Varndean College and has taught sessions at the Tate Gallery.

Working with oils to create evocative and nostalgic works of art, Amy’s figurative paintings have a very distinct atmosphere to them. Being naturally drawn to imagery from the past, she uses archive film and photographs to discover her subject matter. Initially having used social documentary photography, she became more enamoured with Screen Archive South East, a bank of amateur videos collected by the University of Brighton. Watching these and taking screenshots, each image then becomes more personal for her than a still photograph, which has already been compositionally framed to tell the story of the initial photographer.

Looking back into our recent past can be an act of remembering and nostalgic mis-remembering, with photographs becoming the memory which then constructs stories around ourselves. Times gone by appearing to be so much more less self-conscious, more free and full of what we were then becoming. These images inspiring explorations of innocence, freedom, friendship, connection and family. and also being able to question the notions of gender and the dynamics of power.

Amy recognises the influence on her works by artists such as Edgar Degas, Peter Doig, Kaye Donachie and John Singer Sargent. Her style acknowledges each of these artists in her own thoughtful way without being mere imitations. From the emotive feel of Doig’s figurative paintings, to the obsessive observation of the human body she shares with Degas, Amy’s paintings are portraits that tell stories, while gesturing towards an overarching narrative that is only partly being represented.

Her painterly worlds connecting us to the past via both their subject matter and the emotional quality of her brushstrokes and the hues which form each image. Her considered peopled spaces, both reminders and idealisations of lives which are separated from us by countless years, yet still they have a draw and a pull to our busied fast paced contemporary minds.

Amy is an artist who certainly does have a distinctive voice and a drive to convey what is relevant and meaningful to her. Her take on life in the ’70s and ’80s, close enough to have memories of, but too far away to really recall those passed years. Her paintings acting as surrogates for all we have lost and all we have gained over fast passing lived years.