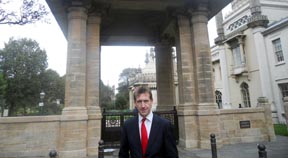 Dan Jarvis MP, for Barnsley and a former Major in The Parachute regiment is the Labour Party’s lead for the centenary commemorations of the First World War. On Friday, October 19 he visited the City’s India Gate at the south entrance to the Royal Pavilion Gardens, which commemorates more than 4,000 Indian wounded soldiers who were cared for in the Royal Pavilion between 1914 and 1916 on Friday, October 19.