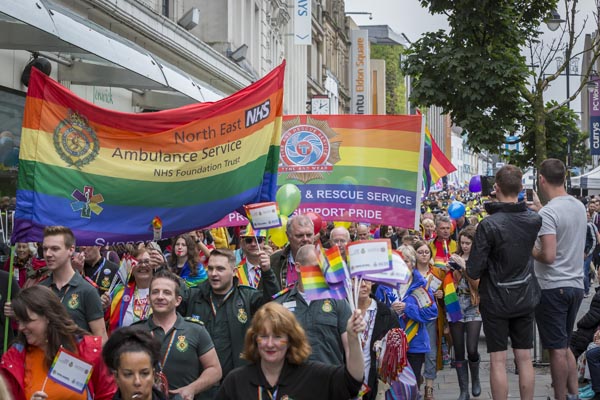 A POPULAR event aimed at celebrating and empowering LGBT+ young people at a party created especially for them returns for its third year in the north east.

NEWCASTLE Pride, sponsored by business improvement district NE1, is inviting young people aged 14 – 24 who identify as LGBT – and their friends – to an evening of entertainment at their annual Youth Prom.

The event, which is free to attend, will take place at the Crowne Plaza on June 26 and aims to celebrate young people’s hard work and commitment to LGBT issues.

Attendees can enjoy live entertainment from X Factor duo He Knows, She Knows, a disco and a buffet, with a dress code of dress as fabulous as you are and there are changing facilities available for those who want to get ready at the venue.

Stephen Willis, festival director of Newcastle Pride, is delighted to be bringing the prom night to the city for a third year in a row.

He said: “The Youth Prom is a really important event on the Newcastle Pride programme because prom is a rite of passage that many people in our community miss out on due to feeling that they can’t fully express themselves.”

“Our event is open to anyone who identifies under the LGBT umbrella and they are free to bring their friends – however they identify – because it’s all about having a fun, carefree night at prom.

“We want to show young people that they can be proud of who they are and that there is a whole community of people out there who are just like them.”

Jay Anderson, 18, is the trans youth engagement committee member for Newcastle Pride and is helping to organise the event this year, having attended last year’s event not long after he came out as trans.

“This is my first event helping out with Pride and I’m really excited to be a part of something that is going to help kids across the LGBT+ spectrum express themselves in a safe space,” he said.

“It’s a really fun night because there is no pressure to conform to society standards so you can dress however you want to and express yourself however you feel comfortable.”

The event runs from 6:30pm – 11pm and attendees can click here: to reserve their free tickets.

The Youth Prom is part of a programme of events happening at venues all over the city in the run up to the Newcastle Pride weekend, which takes place from July 20 – 22.

Newcastle Pride has a huge musical line-up this year, with Alexandra Burke and S Club headlining the Manchester Airport San Francisco Stage over the weekend and performances from Gareth Gates, X Factor’s Jack and Joel and The Voice star Jordan Gray.

The popular festival – which is one of the largest, free events of its kind – is organised by LGBT charity, Northern Pride and brought more than 73,000 visitors to the city in 2017, generating more than £9.2 million for the local economy.