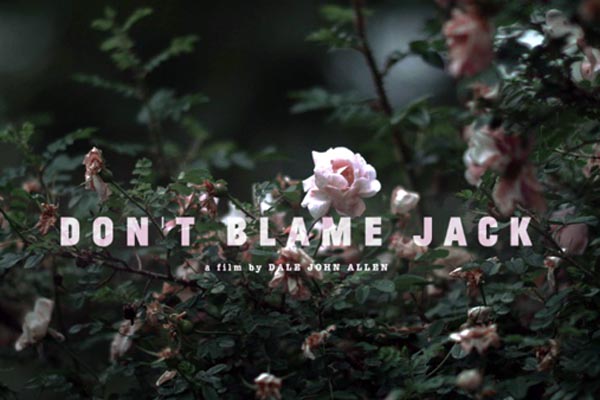 DON’T BLAME JACK is a short film about learning self-love and self-appreciation after a diagnosis of bipolar disorder.

THE FILM is a semi-autobiographical story about overcoming a loss of self, the recovery process, and adjusting to new circumstances. It is a story about learning self-love and self-appreciation and acceptance.

DALE John Allen is an artist filmmaker based in Manchester and a postgraduate film student at Manchester School of Art. His work explores themes surrounding the social politics of representation, particularly within the LGBT+ communities, in addition to creating work to challenge the stigma surrounding mental illness.

His 2016 short, A FILM ABOUT LOVE, won the short film award from Art with Impact. In 2018 his short, Hugo, XO, was nominated for Best LGBT Documentary for Amsterdam’s New Renaissance Film Festival.

Dale says: “This project is of personal importance to me as it is based on my story. In February 2015 I was diagnosed with bipolar affective disorder and, like so many others before me, struggled with coming to terms with what this label meant and how it would affect my daily life. I created A FILM ABOUT LOVE from my recovery journals.

“DON’T BLAME JACK is a semi-autobiographical short-film which tackles the subject of post-diagnosis. Your problems do not go away once you receive the diagnosis, but instead the long, often dull reality, of recovery just begins. This story demonstrates how mental health and sexuality can have a profound impact on an individual’s life, with hope to highlight important issues that members of the queer communities face. Many members of the queer community suffer from mental health issues such as depression, which can often be exacerbated by fear of acceptance. Many members of the LGBT+ communities end up homeless, or struggling with addiction.

“This story is about accepting that I am not just my mental illness and I am not just my sexuality. I am a passionate voice with a story I wish to share and inspire by waving my pride flag in the name of love.”

This film is ready to go Dale just need a little financial help.

All three charities are organisations fighting to improve the lives of LGBT+ communities suffering from ill mental health, and those facing homelessness and addiction.

To make a donation to Dales Crowdfunder Campaign, click here: