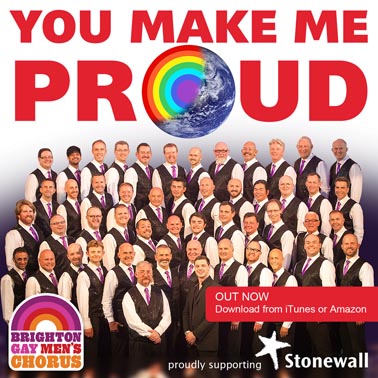 The single is available for purchase on iTunes, Amazon mp3 and from all good online retailers. Ten per cent of the profits from sales will be donated to Stonewall, the national lesbian, gay and bisexual equality charity.

The project is supported by Eastenders actress June Brown.

“As Patron of Brighton Gay Men’s Chorus, I am thrilled to support the boys with this fabulous charity single, which is both inspirational and helps raise awareness and funds for Stonewall, to promote equality and fight discrimination.  I would encourage everyone to buy the song and to support this great cause”.

“As a registered charity, part of our key objectives are to promote equality and diversity, to raise public awareness of the LGBT community, and to eliminate discrimination on the grounds of sexual orientation and gender identity.  We love the song and the positive message it sends out to everyone, wherever they are in the world, and whatever their situation.”

You Make Me Proud was written by Howard Alexander who has decided to release the song after it won an international competition run by the Sydney Gay and Lesbian Choir, in their search to find an anthem to create the world’s largest virtual choir, called the OutPostChoir Project.

Howard, an original member of the Brighton Gay Men’s Chorus was keen that the chorus took part in the recording.

“I wanted to create a very positive song which was uplifting and inspirational to everyone. Brighton Gay Men’s Chorus have sung the song so well and I think they really convey the feelings I intended, about staying positive and strong and supporting one another on our continuing journey, until one day I hope, diversity will be universally celebrated, and we will be able to say to all our communities and politicians…’You Make Me Proud”.

Brighton Gay Men’s Chorus will be performing You Make Me Proud live along with four other choirs during We All Live Together: A Concert For World Aids Day in Brighton on Saturday December 1, to benefit the Rainbow Fund.

For further information or to buy the song, view:
BGMC