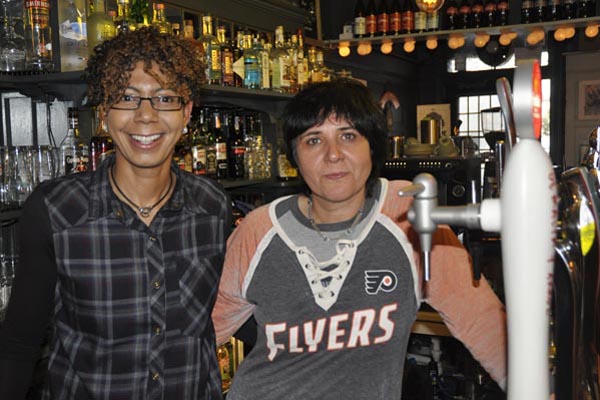 This month Morgan Fabulous popped into Kemptown to chat with Arly and Bego, owners of the newly refurbished pub, The Crown.

The Crown, a freehold venue, offer a variety of spirits and lagers, however Arly and Bego welcome coffee and speciality tea lovers, as they feel that during the day not everybody wants to have an alcoholic drink. The couple have made The Crown into the perfect hub to have a coffee, check emails, socialise with friends and have a refreshing alcoholic beverage.

Open for nearly 100 years, the new owners have been operating this new ethos at the pub for just the last five months.

They both laboured for two months whilst the bar was closed, planned the design and decorated the pub themselves, changing the internal décor; the selection of beer and spirits and the general ‘feel’ of the pub.

Previously they bought and restored a 15th Century cottage in Cambridgeshire, bringing it back to life so that the history and beauty of the house could be restored and enjoyed by the new owners.

They said: “It was challenging but rewarding to see the final product of our hard work, and great experience for when we refurbished the pub”

The Crown has taken over their lives – but in a good way attracting an eclectic mix of individuals including locals and visitors to Brighton including members of the LGBT+ communities. They both work behind the bar six days a week and the pub is closed on Mondays.

Arly says their customers are their biggest assets: “they make us laugh, leave us feeling bemused and often share their wonderful life stories with us…there is never a dull moment.”

They decided on a whim two years ago that it would be nice to own a bar in Brighton. When the opportunity presented itself for them to buy The Crown, they were able to bring their dream to reality.

Having never worked in a bar they are the first to admit they are learning as they go. With help and advice from their customers, they have educated themselves and attended several courses to be clear on the basics and legal compliance. However, it seems that their lack of experience may be a bonus as they are often told by their knowledgeable real ale drinkers that they sell the best pint of Harveys outside of Lewes!

Bego grew up in Bilbao in the Basque Country in the North of Spain and graduated from San Sebastian School of Film and Video. She later came to England to study multimedia at Birmingham University, finalising her studies with a Masters in Fine Art Photography at London Metropolitan University. She went on to work as a film/video technical adviser at Goldsmiths and University of London. She likes to chill out and enjoys reading. Her favourite books are; The Secret History by Donna Tartt and during spare moments of madness she love a bit of Rumi’s poems.

Arly was born in London but grew up in New Jersey and Philadelphia in the United States. She attended High School in New Jersey, and graduated from University in Philadelphia before returning to the UK where she obtained a Masters in HR and an Employment Legislation qualification. Before buying The Crown she worked in HR for over 15 years on a variety of projects. She enjoys cycling, doing anything sporty and loves listening to her favourite artists, Tori Amos and Sarah Maclachlan.