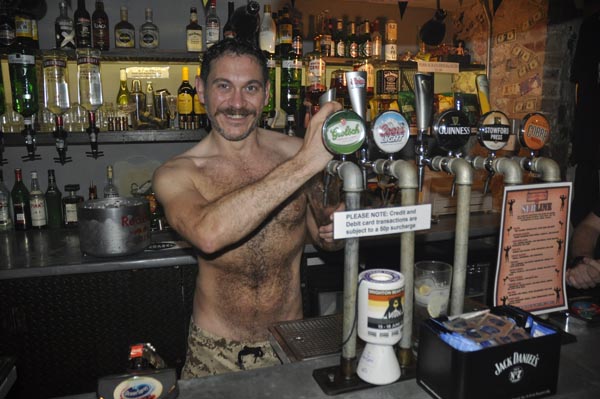 This month Morgan Fabulous takes a step out of the usual commercial pop and sequins and heads off to Subline, managed by Steven David Lee, to find out what makes the bar so unique.

Subline will have been open for seven years come October and beyond the obvious, which so many think is the big thrust (pardon the pun) the atmosphere ranges between community bar and den of iniquity, with occasional forays into stomping dance club and quirky theatre.

Steve took his responsibilities very seriously from day one; and was co-designer of the industrial decor, the membership policy, and everything else! Subline continues to evolve with mixed nights both theatrical and fetish inspired, which have been a huge success, and broadened the appeal of the venue without diluting the core concept, which is important for him. It is helped along by a dedicated and friendly team of five, all regular customers and supporters!

The clientele is more varied than most might think, but their typical customer on a typical night is a mature gay gentleman, looking for somewhere a touch more peaceful and discreet than many of the bigger corporate bars.

Steve is the first to admit that his entrance into the bar trade was a happy accident. He went from his university holiday job at a Little Chef diner into a pub kitchen, and then quickly into bar management which he thinks may say more about his cooking skills than his bar skills.

Steve had been in the pub trade for 11 years. Before arriving in Brighton, he was shunted around several bars, which were all straight, and rural-ish as a troubleshooting manager.

He’d just completed an eight year tenancy on a rural pub on the outskirts of Henley-On-Thames, before he was offered Subline which was the first gay venue that he had managed.

He loves the social side of working in the bar trade and admits that he is much shyer than people think (or believe) him to be, but being behind a bar forces him out of himself! He also takes great satisfaction in providing a secure and sociable space where the community can relax and be themselves.

Charity events are very important to Subline. Besides being the largest fundraising donor to Brighton Bear Weekend, with events through the year, not just during the weekend itself; they have other regular events, most notably the annual Mr Subline contest which benefits the Terrence Higgins Trust

Steve grew up in Leafy Surrey – spending most of his childhood in Ripley, famous he says for Eric Clapton, but very little else.

His work keeps him very busy and he has very little time to himself, but when that time is available his inner geek gets a chance to indulge in video gaming; and he can clear (almost) all of the tracks on Rock Band 3 Expert guitar… He also loves music and reading, his favourites read being a difficult choice between Douglas Coupland’s All Families Are Psychotic and Clive Barker’s Weaveworld.

Steve has a few favourite tipples; he has recently been drawn to Espresso Martini’s, he loves a glass of Rioja, or a classic gin and tonic but tends to default to Vodka and diet coke. In fact he will drink anything!