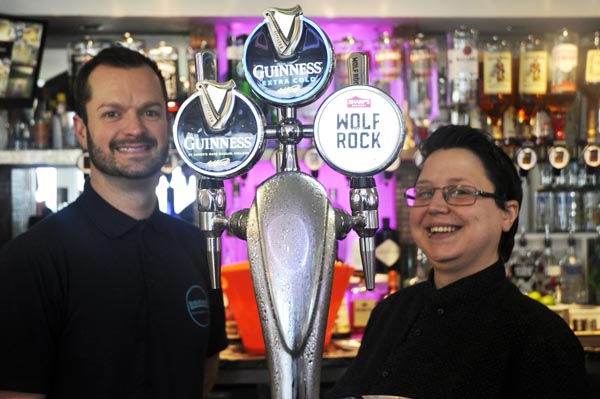 This month Morgan Fabulous chats to the new management team at Legends on Brighton seafront.

Legends, for many years a stalwart of the commercial gay scene in Brighton and Hove, and one of the few late night bars left in the gay village offering great value drinks until 5am in the morning, has two new managers.

Following the departure of Reece Roberts who managed Legends for the past 10 years, Dan Austin and Jemela Quick have jointly taken over running the multi award-winning venue.

Last year, Legends went through a refurbishment, but when Dan and Jemela took over the reins they felt it was important that they didn’t change too much.

Tony Chapman had spent a handsome amount of money on new floors, upgrading the bedrooms and new decoration to support the Legends staff who take great pride in the venue, enabling them to maintain the high standards they’ve always been proud of. With the best will in the world there was always going to be an impact of some sort, but what Reece created during his time at Legends was a fantastic working business model. Obviously some faces have changed as they always do in this industry but Dan and Jemela just want their customers to continue feeling at home and relaxed when they come to visit the bar, the club or the hotel. From a personal view it was nice to see that there were still a lot of familiar faces behind the bar.

Dan originally worked for Barclays Bank as a mortgage advisor, before deciding on a change in career and moving into dentistry. He trained to be a dental nurse at Kings, working in a dental surgery for a few years. Though out his time poking around in people’s mouths he worked part-time at Legends, in the kitchen, as a housekeeper and behind the bar.

Jemela originally worked in retail. She started her bar career working in Club Revenge, but when the club was sold she moved up the road to work behind the bar at Legends. The rest, as they say is history. She loves seeing all of the familiar faces that Brighton has to offer and says that going to work is more like visiting friends and family than actually doing work.

Dan and Jemela have lived in the same parts of the UK at similar points in their lives and are both from large families with seven and eight siblings. They were born in the West Country, Dan’s family moved to Scotland for a few years, and then returned to Hertfordshire, where Jemela’s family also lived.

Jemela says: “We both love Brighton incredibly, the quirkiness and individuality that everyone has without anywhere near as much judgement as you feel in most other parts of the UK”.

Dan is currently in a new relationship, “it’s still early days”, he says “I just want to have stress-free happiness…and pink trainers! You can never have enough pairs of pink trainers!” He is currently studying accountancy so doesn’t have much free time outside of work with anyone other than the cats, who need feeding regularly. Legends is his full-time passion. His favourite film is Iron Man and his favourite readings are the Harry Potter Books.

Jemela has been with her partner Ali for a very long time! So long, they now have three cats together. She says: “I just want to be successful in life and happy. Not sure where I see myself in five or ten years’ time but I hope it’s still here in Brighton with my friends around me.”

She loves reading, watching movies and being social. She says her favourite film is a toss-up between Love Actually and Perfect Pitch and her favourite book is All Quiet on the Western Front,

She adds: “Like Dan said, there’s not really much time for ourselves, but we’re doing what we’re passionate about and want to make sure we try our best.”