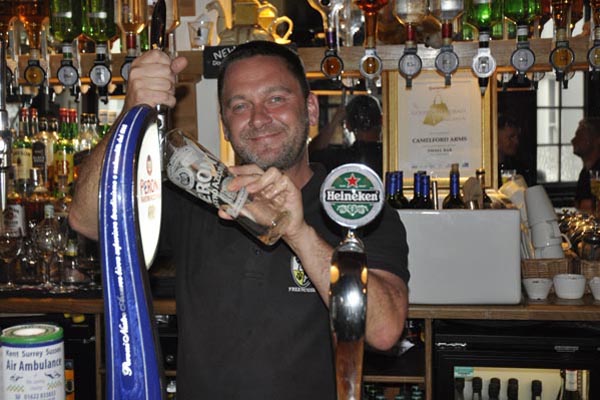 Jay Hopkins, the current manager, has worked at the Camelford, formerly know as The White Horse since it opened in May 2010.

He started as a bar man progressing into a managerial position when the then manager decided to leave. He says he loved working with the team, they had achieved so much and the move up to manager felt so natural. The bar was perfect the way it was so he didn’t want to change anything. It remains stylish, classic looking with a warm friendly atmosphere and everyone is welcome.

Jay was born in Surrey and brought up in Peterborough, Cambridgeshire. He had his first taste of life behind a bar at the age of 21 when he moved to London to work at Brief Encounter, in the West End. He also worked at the Royal Vauxhall Tavern and The City of Quebec pubs, both in London. He moved to Brighton twelve years ago and worked in the Star Inn (now the Mucky Duck) for three years before he moved to the Camelford Arms.

The thing he loves the most about his job is the customers, and the warm dog friendly atmosphere of the Camelford which calls itself the most dog friendly pub in Brighton.

If you haven’t been there yet, check out quiz night on Thursday’s where you can win yourself £300. The award-winning Sunday lunches are worth their weight in gold, even for vegetarians, and watch out the Christmas menu which begins later this month.

The bar also boast a Moroccan Garden area, hidden away at the rear of the pub which seats twelve people, and has outdoor heating so it can be used all year round.

The Camelford are proud sponsors of the Brighton and Hove Sea Serpents Rugby Football Club, who have been playing since February 2016 and are the current holders of the Golden Handbag for best local sports club. You will often find the team in there supporting their sponsors.

Jay loves to travel and visit his favourite destination, South Africa, where he hopes to one day live. He isn’t sure it will happen but it is his dream destination.

He loves living in Brighton and has recently moved to the countryside on the outskirts of the city, with his husband, who is a criminal defence lawyer. They have been together for sixteen years, nine of them married. They were both looking to get out of the busy city and enjoy a relaxing retreat in the countryside where the skies are clearer and there is less light pollution where Jay can enjoy his hobby, Astronomy. He now has sufficient space to build his own observatory where it is much easier for him to spot the constellations and taste the odd Milky Way.

Jay loves the countryside and spends hours walking country lanes with his dog Frankie. His favourite tipple is a pint of Fosters, his favourite film is Back to the Future Trilogy and he loves reading autobiographies, his favourite being Paul O’Grady’s At My Mother’s Knee.