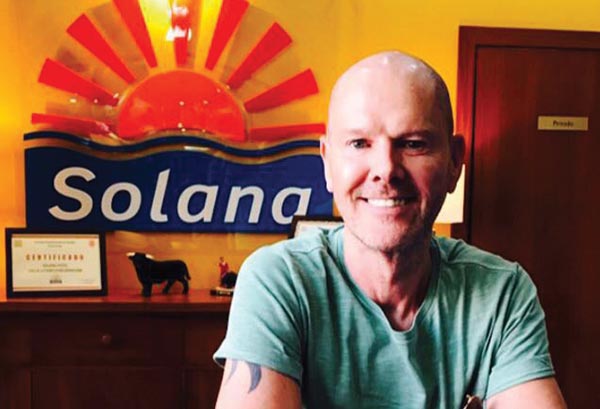 Alasdair Jarvie with cast from Pricilla

Bar Broadway is the only bar in Brighton & Hove that is all about the musicals, or anything with links to musical theatre. Beyond that, they try to provide something a little different to the Brighton scene.

When co-owners Alasdair Jarvie and Michael McGarrigle took over they gave the bar a makeover inside and out. They painted the bar ‘Broadway Red’ and installed three gilded TV screens around the bar to play musicals from start to finish.

The curtains were raised, and all that remained was to get Charlie Hides (now a RuPaul’s Drag Race star) and Queer As Folk and Emmerdale’s Denise Black to bring some fun and laughter and showbiz glitter. Next on their shopping list of things to do, is a full refurbishment of the downstairs toilets, the only part of the previous bar that remains untouched.

Both Alasdair and Michael come from theatre backgrounds. Alasdair gained an MA in Film & Television Scriptwriting, and ran a fringe theatre company in Manchester which produced 18 plays over four years.

Michael is also a costume supervisor for film and TV. He has been fortunate enough to work with some of the greats, including; Laurence Olivier, Kirk Douglas, Joan Collins, Sean Connery, Joel Grey (MC from Cabaret) and Topol (Fiddler On The Roof). At the moment, he is currently in Spain working on series 10 of ITV comedy drama Benidorm.

Alasdair grew up in Inverness but escaped to Glasgow when he was 17 to study mathematics and computer science. A few years later he met Michael, who grew up in Glasgow, in Bennets (now AXM), they hit it off, and rest as they say is history.

Michael is a huge fan of Spanish film maker Pedro Almodóvar, and his favourite film is All About My Mother. His favourite musical is Oliver, the first musical he saw. Alasdair’s favourite film is Connie & Carla, he loves the humour, campness, the singing and Debbie Reynolds. Muriel’s Wedding comes a close second.

Michael likes to read biographies and he’s just read one on Dusty Springfield.

He says: “I don’t think anyone realises how tragic her life was, the book left me in tears and stirred a renewed interest in her music. She was surely the best British female vocalist this country has ever produced, even though she was part Irish.”

Alasdair and Michael are totally overwhelmed by how popular Bar Broadway has become since they took over on August 1, 2014. It’s gone way beyond their expectations. Sometimes they look at each other and know they are thinking the same thing: “is this really happening?”

They acknowledge they’ve been very lucky with their staff, as they’re constantly told how they’re all so friendly and good-humoured. Alasdair says they’re a great bunch of guys, they work hard and they both believe them to be amongst the friendliest bar staff in Brighton.

Michael’s favourite thing about being an owner of Bar Broadway is that when he’s alone in the bar, he can listen to any song from any musical of his choice when he is doing the dusting.

Alasdair says he’s not much of a drinker, but vodka tonic is his favourite tipple, though he’s partial to the Espresso Martini’s at Plotting Parlour, along Steine Street, which he says are “quite moreish”.