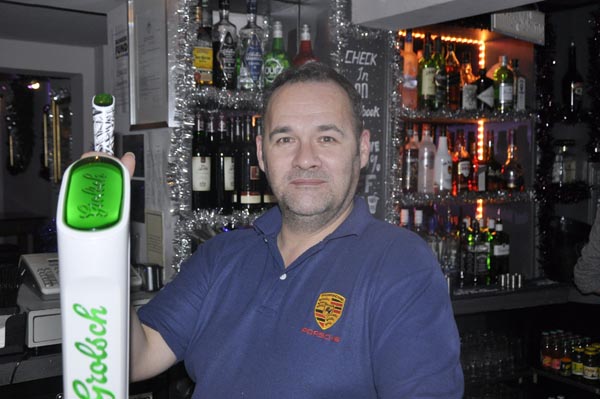 Morgan Fabulous chats with Barry Nelson, manager of the Queens Arms in George Street, about Thailand, cabaret and Victoria Sponge.

Barry took over the Queens Arms nearly two and a half years ago and made some drastic changes to make the bar what it is today. Walls came down, the bar was replaced, the stage relocated and the whole interior was redesigned. Importantly for the drag queens, the upstairs bedrooms and kitchen were all remodelled giving a larger space for the cabaret acts to get ready and drink complimentary champagne before heading to the stage.

The bar has changed significantly since changing hands. Some preferred how it was then, others prefer it now, but that’s inevitable when a venue modernises.

Barry often used to drink there before he became manager and feels it now attracts more of the traditional Brighton cabaret crowd and sees new faces as well as the regulars who’ve been coming to the bar since it opened over 35 years ago.

During the winter months it’s closed on Monday and Tuesday but available for public hire for birthday celebrations and parties. On Saturday nights the bar staff dress in top hats and waistcoats to give the bar a burlesque feel.

Before taking over the reins at the QA, Barry managed Bar Revenge and later Revenge for eight years, where he first introduced the contestants of X-Factor onto the stage.

It was also the start of his drag career, as one night, 12 years ago, a member of the Lollipop Girls who appeared every Friday night cancelled and he got roped into standing in for them. Today you can catch him hosting at the Queens Arms on a Saturday and Sunday as the sassy seaside landlady Victoria Sponge.

Barry grew up in Cheshire then relocated to Bristol and Bournemouth where he worked on the gay scene before coming to Brighton to manage Revenge. Deciding to take a break from the commercial gay scene, he went on to be food and beverage manager at the Queens Hotel where he introduced Dine With The Stars, a cabaret dinner hosted by drag queens and special guests, which raised over £16,000 for the Thai orphanage in Pattaya, Thailand.

When the Queens Arms last changed hands Barry was offered the post of manager. Even though he loved his job at the hotel, he felt he belonged in the pub trade and accepted. Barry enjoys cabaret which has been evident in all his management ventures, and he loves travelling and exploring Asia, particularly Thailand where he’s been 26 times. In his spare time he enjoys reading about the history of Thailand and its celebrations as well as reading psychological thrillers.

Victoria Sponge has also visited Thailand and hosted events to raise money for the children’s orphanage there. He says it’s uncomfortable being in full drag in 40º heat and keeps his makeup in the fridge until he’s ready to apply it – a tip he plans to share with Davina Sparkle.

If you love cabaret or just fancy a drink and a slice of Victoria Sponge, then you’ll find Barry at the QA this and every weekend, that’s if he’s not on his 27th trip to Thailand.