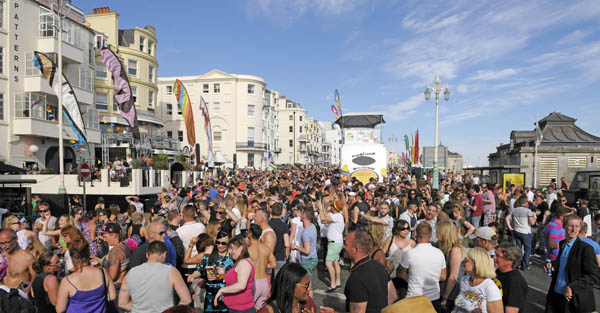 THE meeting, advertised on a poster in St James Street, attracted around sixty people to St Mary’s Church Hall in Kemp Town and was promoted jointly by The Kingcliffe Society and St James’ Community Action Group.

The poster read: “all local residents, the representatives of local businesses and charities operating locally are invited to attend.”

Yesterday morning, Gscene magazine emailed all businesses that were involved in the 2018 Pride Village Party asking if they were attending the meeting. Every businesses that responded indicated they did not know about the meeting and had not received any invitation from the organisers.

The poster also claimed that representatives of Brighton Pride CIC who run the Pride Village Party, Brighton and Hove City Council and Sussex Police had been invited.

It emerged yesterday morning (January 14) that Brighton Pride CIC had not been invited to the meeting to put their case and answer questions and Brighton Council had only received an invitation on Thursday, January 10. Sussex Police were not in attendance.

At the start of the public meeting Paul Kemp, Director of Pride CIC revealed that neither Brighton Pride CIC or himself had received any invitation to the meeting.

He explained that three times in the last two years Brighton Pride CIC had asked the Kingscliffe Society to produce their proposals for managing St James Street if the Pride Village Party was moved to Madeira Drive. No response was received to each request.

What followed then was a bizarre set of exchanges between Mr Roger Rolfe a trustee of the Kingscliffe Society who appeared to be chairing the meeting and different members of the audience resulting in Mr Rolfe shouting to the LGBT+ people present that “You lot don’t need a Pride anymore, you have not been repressed for 50 years”.

Other comments from Mr Rolfe on opening the meeting included: “We are here tonight to stop ourselves from being blasted out of our homes by the noise and mess” [a rather interesting, neutral scene-setter for a chair], “We want to clear the filth off the street” and “the decibel level in my house is louder than being next to the bells at Big Ben”.

One of Mr Rolfe’s supporters who described himself as “a homeless refugee” during the Brighton Pride weekend, brought derision from the majority of the audience and was told by one local angry business owner: “To describe yourself as a ‘homeless refugee’ is frankly insulting to the poor souls on this planet who are genuinely homeless or refugees. Get a grip”.

A walkout followed by about a third of the people present, Mr Rolfe, the chair was replaced by David Spafford from the St James’ Community Action Group who conducted the rest of the meeting to a half empty room.

Mr Spafford was fair and gave everyone the chance to air their views including the voices of sensible local residents who recognised there was little to be gained from moving the event to Madeira Drive, as people given the choice of paying an entry fee to an organised event on the seafront or drinking at their local gay bar for free would more than likely continue to congregate in St James Street outside their favourite gay bar.

Some local residents expressed genuine concerns about general noise levels over the weekend. These were noted and Pride organisers promised to work with Brighton and Hove City Council to address those concerns in 2019.

Larissa Reed, Executive Director for Neighbourhoods, Communities and Housing at Brighton and Hove City Council indicated that both the Fire Service and Sussex Police supported the event remaining on St James Street and encouraged everyone present to have their say and fill in the Council’s consultation which closes on January 31.

The resulting responses from the consultation will be reported to the Tourism, Development and Culture Committee on March 7, 2019 at 4pm in the Hove Town Hall Council Chamber. If you wish to speak at the meeting you need to let the Council’s Democratic Services team know in good time (usually they need at least a weeks notice). The meeting is open to the public.

Local entertainer David Pollikett aka as Davina Sparkle explained to Gscene why he walked out of the meeting in disgust. “What a Debacle, I only went along as I was suspicious after seeing just a few posters put up around St James Street announcing the meeting. What particularly annoyed me was the out and out bigotry displayed in some parts of the room. The chair Roger Rolfe said he felt persecuted during our Pride celebrations. Persecuted! he has no idea what persecution is compared to the reason why we need a Pride in the first place.

“The Pride Village Party is now safe, secure, free from yob’s, has toilets, security and first aid all provided and paid for by Brighton Pride who are doing a magnificent job.”

When Mr Rolfe said: “You lot haven’t been persecuted for the last 50 years”, I thought there’s no point in arguing with an idiot and walked out of the meeting along with other prominent local residents and business owners. We told the organisers as we left: “This meeting is a farce and so is your homophobic organisation which is falsely masquerading as some caring residents association. It is not!”

Bill Smith editor in chief at Latest TV and magazine summed up the views of many in the room when he said: “Local businesses struggle to survive fifty-one weeks of the year and you want to move somewhere else their biggest payday of the year, which helps keep hundreds of local people in jobs all year round and helps many businesses survive through the long winter months, and all because you won’t be inconvenienced for just 17 hours each year.”

Responding to a question as to why the Chair of the Kingcliffe Society not present at the meeting, Mr Rolfe said that the chair was not interested in the issue and did not live in the St James Street area. Gscene have attempted to speak with the chair Mr Robert Edwards but he has not responded to our messages.

The Kingscliffe Society is a registered charity. To become a member send a cheque for £3 to Bernard Evans, Kingscliffe membership secretary, 150 Eastern Road, Brighton BN2 OAE. Their aims are listed as “To improve protect and preserve for the benefit of the public the area known as The East Cliff Conservation area, in St James’s and Kemp Town Village areas of Brighton, to ensure that it does not become lost to future generations either through bad planning wanton destruction or excessive traffic.”

Mr Rolf indicated the Kingscliffe were having trouble filling officer posts and encouraged people at the meeting to join the charity.