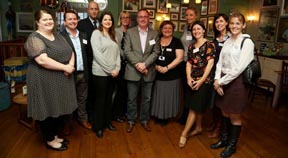 Over 100 people from sixty local businesses gathered last week to celebrate some of the city’s tourism successes over the past year.

THE NETWORKING event, hosted by VisitBrighton, the city’s official marketing tourism arm, was held at the Verano Lounge, Western Road, Brighton. A round-up of the unit’s sales and marketing activity to date was presented by Howard Barden, BHCC’s head of tourism and venues.

Brighton and Hove attracts over 8.5 million visitors a year and tourism contributes an estimated £780 million to the local economy.

VisitBrighton works to promote the whole city as a visitor destination, both nationally and internationally, and currently has 430 businesses signed up to its partnership scheme, which costs from £180 a year.

All subscription money is used to market the city through campaigns and press trips. So far this year, VisitBrighton has organised over 100 press trips; this has resulted in press coverage with an advertising equivalent value worth in excess of £4.5 million.

Upcoming campaigns include a dedicated microsite, www.christmasinbrighton.co.uk, to promote the city for winter breaks and Christmas shopping and a countryside microsite promoting the city as a base from which to explore the coast and countryside.

The team is also already working with national tourism units VisitEngland and VisitBritain to capitalise on the Rugby World Cup matches being held in Brighton next September, which will raise the city’s profile to potential visitors both within the UK and overseas.

Since January 2014, VisitBrighton Convention Bureau has won 54 conferences and meetings which will bring over 30,000 delegates to the city and deliver £42m in economic benefit on their arrival, a 17% increase on 2013.

Geoffrey Bowden, BHCC’s chair of economic development and culture, said: “It’s great to see so many representatives from local businesses at these events, which are there not only as a networking platform but as an opportunity for partners to share their ideas and questions with the team face to face.

“As most people are aware, council funding from central Government is falling dramatically over the next four years and this will place even greater emphasis on collaborative working in the future.

“The good news for tourism in Brighton and Hove is that the council already has a strong vehicle in VisitBrighton and the partner scheme is a great example of successful collaboration between the public and private sector.  We now have more members than ever before at the half-way point in the partnership year and this is something we will strive to strengthen for the benefit of the whole city going forward.”

Earlier this year the latest statistics from Tourism South East’s Economic Impact of Tourism study showed that the city’s tourism industry had continued to prosper despite bad weather and a sluggish national economy. Trips where visitors stayed overnight hit 1.4m, up five per cent, and the total number of visitor nights spent in the city rose by 7.5 per cent to 4.8m.

Figures released in May by the Office for National Statistics put Brighton as the 8th most visited town for city breaks; 50,000 more overnight visitors stayed overnight in 2013. ONS statistics also showed the city as the country’s most popular seaside destination for overseas visitors and in September (2014) readers of Condé Nast Traveller magazine voted Brighton and Hove the ‘Best UK city for restaurants and bars’, ahead of London.