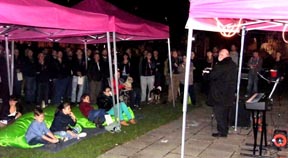 THE VIGIL was one of many taking place all over the country to mark the three nail bomb attacks that rocked London on April 17, 24 and 30 in 1999 and was opened by the Rev Michael Hydes.

Speakers at the event which took place by the Fountain on Old Steine included:

• Purna Sen, formally Head of Human Rights for the Commonwealth Secretariat and Director for the Asia-Pacific Programme at Amnesty International. Purna is a member of the Board of RISE, (providing services on violence against women in Brighton) and the Kaleidoscope Trust (working to support LGBT people in environments where they are unsafe) and is also the Labour Parliamentary Candidate for Brighton Pavilion;

• Cllr Graham Cox, the Conservative Candidate for Hove and Portslade and former Division Commander of Hove Division, and

Purna Sen the Labour Parliamentry Candidate for Brighton Pavilion said: “Even in our City, sometimes spoken of as the LGBT capital of the country, crimes and harm continue to blight our community.

“Every year Pride rightly celebrates our City’s diversity and especially our LGBT community. It also marks the real progress made with legislation such as the repeal of Section 28, the introduction civil partnerships and marriage and equalising the age of consent.

“But it is important that we also remember that the struggle against prejudice and hate crime must continue.

“Not only here but in many parts of the world hatred and prejudice against LGBT people continue and in some places that prejudice is sanctioned by governments.

“I raised human rights concerns with the Ugandan government when that country’s Anti-Homosexuality Bill was written and have worked also on LGBT rights in other countries. In the past, through my work for Amnesty and the Commonwealth Secretariat, I have been to countries where people are in jail for being lesbian or gay.  The struggle for dignity is international, remains to be won here and elsewhere. I am very honoured to be here tonight to be part of this event with you.“

Cllr Graham Cox, the Conservative Parliamentary candidate for Hove and Portslade, added: “It was an honour and somewhat humbling experience to be asked to say a few, what I fear were inevitably inadequate, words at the moving and poignant vigil for victims of hate crime. When I joined the Police in 1980 homophobia was routine. The criminal justice system had no concept of ‘hate crime’ – indeed too often the sexuality of the victim was actually seen as a mitigating factor in justifying violent attacks. Obviously some progress has been made, and attitudes have changed. Victims of hate crime are treated better, and homophobia is properly recognised as an aggravating factor when offenders are sentenced. This progress has only come about because of the bravery of those survivors of hate crime who have come forward and told their stories. It is only right we remember our debt to them, and continue to work together to ensure there are fewer victims in the future .”

Caroline Lucas MP for Brighton Pavilion was the final speaker and she talked about the importance of not overlooking the needs of the trans* and disabled communitites. After a minutes silence, Brighton Gay Men’s Chorus sang four numbers. Hot drinks were supplied by the Terrence Higgins Trust outreach team and the evening was hosted by Billie Lewis, Chair of the LGBT Community Safety Forum.