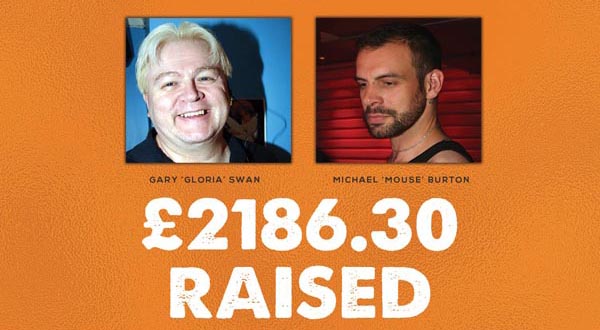 A partnership of LGBT+ venues have raised £2,186.30 to purchase memorial benches in memory of two former employees.

Both Michael and Gary who died late last year, were hugely popular on the commercial LGBT+ scene in Brighton & Hove and managers of the participating venues wanted to establish a lasting memorial to them.

The purpose of the fundraising weekend was to purchase memorial benches in their memory, to be located at the south end of New Steine Gardens, at the heart of the Gay Village in the shadow of the Brighton AIDS Memorial.

Staff at each venue shook buckets over the weekend raising £2,186.30 to make the purchase of the benches possible.

The weekend, a unique example of the benefits of partnership working on the commercial LGBT+ scene,  was enjoyed by managers, staff and customers, and has helped bring the participating venues closer together. Hopefully, it will be the first of many such fundraising initiatives, when the commercial scene works together to support LGBT+ and HIV organisations who daily are being forced to close their services due to Government cutbacks.

Andrew Roberts, Manager of Revenge and Bar Revenge, said: “All five venues worked very closely together to remember two very popular former members of staff who contributed so much to the commercial gay scene in Brighton. We are thrilled that it was possible for us all to come together in such a positive way, reach our target and establish a lasting memorial of the contribution Gary and Michael made to gay Brighton over the years.”

Chris Marshall General Manager of Charles Street, added: “We all would like to thank everyone who put money into a bucket during the Unity Fundraising Weekend. What a marvellous way for everyone to remember both Michael and Gary.”