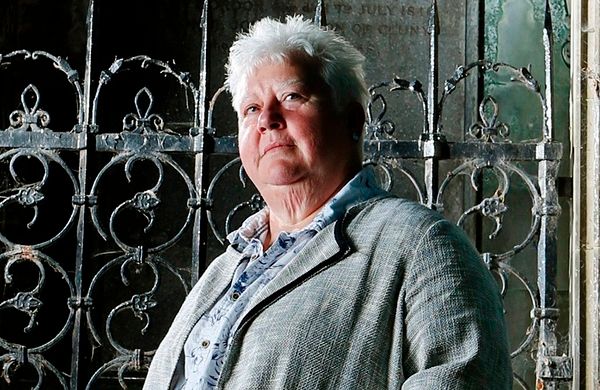 Val McDermid is one of the most successful crime writers working today. Her latest novel is the first instalment of a new series. Journalist Allie Burns is her new protagonist. The story begins in 1979, later moving to 1989 and 2019. It’s an ambitious project that will chronicle 40 years of history. We caught up with her to find out more.

What drew you to the year 1979 and the world of journalism? “I wanted to write a sequence of novels that covered a period of time. When we found ourselves in the grip of the pandemic, the world as we knew it changed overnight. I didn’t want to write a book set during the pandemic because I didn’t know what kind of world this book would be emerging into. So I end this series in 2019, during the last year of so called normal life.”

Val became a journalist in 1975, working on local papers and then at the Daily Record in Glasgow, Scotland’s national newspaper. Her experience inevitably shaped the way she writes about journalism. “It was very much a man’s world. There were three women reporters. We weren’t allowed to be on shift at the same time because the men were convinced we’d just be sat around gossiping. Somehow when women have a conversation it’s gossip but when men talk about football it’s a major conversation.”

Some journalists romanticise the world of newspapers in their raucous pre-internet heyday. Val doesn’t. “It was long hours, there was a lot of drinking and there was a lot of misogyny. It was not an open, equal environment for women at all.”

“I wanted to take a long look over 40 odd years. So much has changed since 1979. I thought it would be interesting to explore that time period. It might be hubristic and I might be riding for a fall, but I hope not!”

Val McDermid is widely considered to be The Queen of Crime. How does she define her chosen genre? “For one thing it’s entertaining. A good crime novel has you on the edge of your seat. That drive to find out what happens next is a powerful one. Adrenaline is a great drug – it’s free! I think people want to be excited in a safe space. It’s like going on a rollercoaster and screaming but afterwards you want to do it again, even though it was terrifying. You know at the end, however many terrible things happen, someone is going to come along and make it right. I think that’s a comfort that’s been particularly important to us over the last couple of years with the pandemic.”

“I also think there’s a kind of sublimation going on. We’ve all felt murderous at one time or another. And for all sorts of reasons we don’t act on it, but in a crime novel you can fantasise. I’ve killed a lot of news editors over the years in my books. It’s also turned into the novel of social realism. They’re the books you go to to find out how we live now.”

Do you need to know where the bodies are buried before you start writing? “I used to plan in great detail. I had file cards with every scene plotted out chapter by chapter. That worked well for me for a long time, and then it just stopped working. I developed a much looser approach. I have a sense of the shape of the story before I start. I know two or three crucial turning points along the way, and then I just write it.”

Val broke down a lot of barriers for LGBT+ writers in the 80s and 90s. “I didn’t think of myself as a trailblazer. When I wrote the Lindsay Gordon novels in the 80s, I was aware that nobody had written a British lesbian detective before me. I wasn’t really thinking about it. It was the story I wanted to tell at the time. I was also conscious that when I was growing up there was no template for a lesbian life. You didn’t see lesbians. They were invisible.”

“I didn’t want it to be just about being gay. I wanted the gay aspect to be one part of it. I didn’t want to live in a ghetto and I didn’t want to write in a ghetto. Lindsay Gordon’s sexuality is an important part of who she is, but not the only part. There’s her Scottishness, her job as a journalist, her interests and tastes.”

“It’s very gratifying for me that so many people have found something that spoke to them in my books. So many women still come up to me and say your books were the first ones I read with a lesbian protagonist. The books have never been out of print. That’s partly testimony to the paucity of books that describe our lives. I’m proud to be part of that but I didn’t start out with a revolution in mind. It’s always been about telling the stories that were shouting loudest in my head.”

Val has been very successful. Nicola Sturgeon interviewed her at the Edinburgh Book Festival. She’s also sold over 17 million books. Is she part of the establishment now? “I try to stay out of that world. I don’t live that kind of lifestyle. I want to be able to speak about the world as I see it and not feel constrained. The First Minister always interviews writers at the book festival. I was the first one she chose, and since then we have developed a friendship that mostly circles around books. I’m not part of any party.”

“One of the privileges of my success is that it allows me to lend my name to things I believe in. That’s the most important aspect of having a public profile. The only use of that power is to support things that matter.”

What is Val most anxious about and most excited about for her new series? “Well, I’ve got five books so I’m committed. I’m anxious about getting it right and not imposing my own recollection on the books. I’m anxious about finding really strong stories I can carry through each of these years. But I have to marry those external events to a strong narrative that has a dead body in it.”