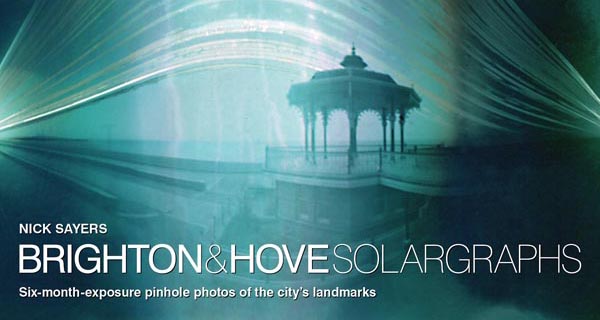 He shot these with pinhole cameras, hand-made from beer cans and photographic paper.

Unlike an instantaneous digital photo, these ‘solargraphs’ have continuous exposure times of three to six months. The tracks of the sun can be seen in each image, as it passes across the sky from Brighton in the east to Hove in the west.

Calendar pages feature a map and history of each photo location and are available to buy for £8.50 at Zoingimage photography shop in central Brighton (1 Sydney Street, BN1 4EN) and at City Books in Hove (23 Western Road, BN3 1AF).

Nick says: “I’ve always been fascinated by the science of the seasons, the winter and summer solstices, tides, eclipses and equinoxes. I start and stop my camera exposures at the solstices because this is when the sun is highest and lowest in the sky. I therefore get a wide, six-month band of sun tracks in my images. Occasional cloud cover gives the lines an intriguingly dashed ‘Morse code’ effect.”

With this strong connection to the seasons of the year, it seemed appropriate to make a calendar of the images. And with the winter solstice, Christmas and New Year coming up, what better time to buy one?”

I will be out around the city from 21 December, installing more cameras – with permission where necessary – to capture a new batch of images. However, these won’t be ready to process until after the summer solstice on 21 June!”

Pinhole cameras made headline news in Brighton in August 2015, when a solargraph camera attached to a seafront road sign was mistaken for a bomb. This delayed the start of the Pride parade, which was re-routed while police inspected the camera and destroyed it.

As well as making this 2017 calendar, Nick runs workshops showing adults and children how to make pinhole cameras for home use, at schools and science events. He also makes other artworks inspired by physics, engineering and maths.