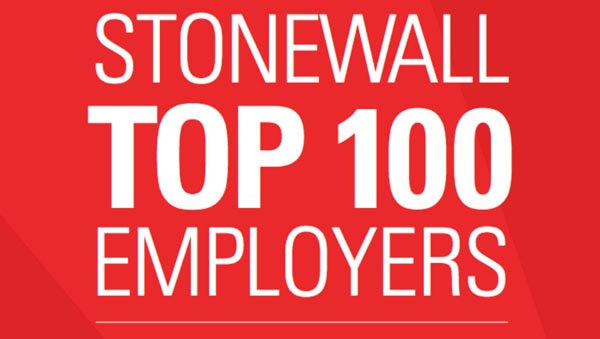 THE Stonewall Top 100 is the UK’s leading list ranking employers from across public, private and third sectors on how inclusive their workplaces are. The list is intensely competitive – with this year seeing more entrants than ever with over 450 public, private and voluntary sector organisations submitting applications. International law firm Pinsent Masons has topped the list for 2019.

A new trend emerging this year saw a significant rise in universities named as inclusive employers. Nineteen organisations working in the higher education sector made the list with the University of Brighton powering in for the first time at joint 72.

The University, was one of a number of Higher Education institutions to make the list this year, with Cardiff University taking the highest position at number 11.

Vice Chancellor Professor Debra Humphris said: “We are incredibly proud to be part of Stonewall’s Top 100 Employers and to be recognised for our progress advancing LGBT+ equality. We are dedicated to nurturing a diverse community, including being a University of choice for LGBT+ staff and students and honouring the vibrant LGBT+ communities within our region.”

This is the first time that Brighton University has featured in the list and comes on the back of a programme of initiatives at the institution. In the last year, as well as improvements to policies, procedures and systems, the University has launched an LGBT+ Allies Programme, hosted the Annual Brighton Trans, Non-Binary and Intersex Conference, taken part in the #MyPronounsAre campaign and had its biggest ever presence in the Brighton Pride parade.

Sussex Police were the only other local organisation featured in the Top 100 appearing at number 81. Brighton and Hove City Council do not enter the index anymore.

Each year, Stonewall also names individuals and groups who have made an outstanding contribution to LGBT inclusion in their workplace. Senior Champion of the Year was awarded to Jonathan Slater, the Department for Education’s Permanent Secretary.

He said: “I am absolutely delighted to have won the Stonewall Senior Champion of the Year award. I am proud of what we have done in the Department for Education and am very grateful for the dedication and support of the LGBT+ network, my leadership team, and individuals in the Department who have gone above and beyond to make it an inclusive place to work. There’s plenty more to do, and I will keep championing the rights of staff to be themselves.”

Last year, Stonewall produced research indicating more than a third of LGBT staff (35 per cent) have hidden they are LGBT at work and almost one in five LGBT employees (18 per cent) have been the target of negative comments from colleagues because of their identity.

Darren Towers, Stonewall’s Executive Director, said: “Stonewall was set up 30 years ago to fight against Section 28 – a vicious law that aimed to ban the ‘promotion of homosexuality’ in educational settings. To now see higher education institutions dominating the Top 100 for the first time shows not just how far we’ve come, but gives a real positive message for the future.

“LGBT-inclusive employers play a crucial role in changing society by using their power and influence to proudly support LGBT people in their organisations. Our number one employer of 2019, Pinsent Masons, is leading the way championing lesbian, gay, bi and trans equality in the workplace. They know that helping staff feel that they can bring their full selves to work doesn’t just make a huge difference to individual team members – it makes real business sense too. They are a shining example for others to follow on how to ensure all staff feel empowered and supported.

“Our recent research revealed that more than a third of LGBT staff (35 per cent) have hidden who they are at work for fear of discrimination. Whether as senior leaders, managers or colleagues, we all have a part to play in making sure that our workplaces and communities are places that accept and support LGBT people, without exception.”

In compiling the Top 100 list, Stonewall collects more than 92,000 anonymous responses from employees on their experience of the UK’s workplace culture and diversity. An overwhelming 93 per cent of non-LGBT employees who responded to the survey say they understood why their employer is committed to LGBT equality.