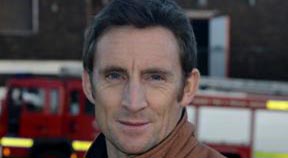 Following the fire that gutted the historic pier in Eastbourne last month, Simon Herbert, Chairman of the East Sussex Fire Brigades Union has issued an extensive statement highlighting his concerns about the ability of the fire service to cope with such incidents in the future.

In his statement Simon said: “Following recent significant incidents that East Sussex Fire & Rescue Service have dealt with I am concerned that the Chief Fire Officer’s proposed cuts, voted through by East Sussex Fire Authority will leave the Service unable to robustly cope in the future with major incidents, spate (sporadic extreme and critical) conditions, road traffic accidents and multiple emergencies at any one given time.

“Firefighters worked extremely hard to bring the very serious Eastbourne pier fire under control so quickly and to save a large part of the pier is a testament to their hard work; especially in the initial stages of the incident.

“At any fire the initial attendance is critical, the speed with which that attendance arrives is crucial but so is the weight of the response, ie how many firefighters arrive with the correct equipment.

“In order to make a positive difference at any emergency incident the response from the Fire Service must inculde the correct speed and weight of attendance.

“This begs the question as to whether the Councillors who voted through massive Service changing cuts to East Sussex Fire Service in June (only Labour and Green voted against cuts) actually understand the relationship that speed and weight of attendance has on the outcome at a fire or other incident.

“They voted to remove a pumping appliance from the City of Brighton & Hove, they also voted to change the shift pattern at Roedean and the Ridge in Hastings (a total of 80 firefighters will be cut). Removing an appliance would leave the City with just 4 appliances, potentially with just 16 firefighters crewing them. The change in shift system at the Ridge and Roedean will increase attendance times at night, due to firefighters being housed in accomodation blocks. They will not respond immediately as they currently do.

“With the recent fire on Eastbourne Pier and also looking to the other pier fires that the south has suffered it shows that cutting the Fire Service to save money is a false economy. The business and financial losses to the tourism industries far outweigh any of the savings that are being made through fire service cuts. Fire already costs local businesses over £6m a year. Tourism generates over £704m each year, any increase in the severity of fire will massively increase costs to local businesses and negatively impact tourism income.

“When an appliance is removed from the City, there will be insufficient appliances available day or night to deal with even a small fire on the Pier. In order to tackle an incident on the pier, resources would need to be brought in from neighbouring conurbations, delaying the work to carry out rescues and extinguish fire. This will lead to a more severe fire, with far more damage and a far greater cost to society and buisnesses. The knock on effect must not be underestimated.

“This not only applies to a fire on a pier, but also any fire in the City. Fires will burn for longer, damage will be worse and public will at greater risk. Not to mention that firefighters being put at greater risk, by having insufficient numbers to deal with incidents.

“In the last week we have seen spate conditions that caused major flooding, again professionally dealt with by the Service and firefighters. However, these conditions stretched the Service to its limits. Had these cuts been in place then it would have taken the Service past breaking point in my opinion. With the change to our climate, such spate conditions may become a far more regular occurance, the Service managers and Fire Authority members appear not to have planned for such changes when voting through cuts to the Service.

“I would urge the Fire Authority to instruct the Chief Fire Officicer at their next meeting in September to put public safety first, to stop with the false economy of fire service cuts. Savings can be made if necessary without cutting frontline firefighters.

“The fire on Eastbourne Pier showed the whole nation how valuable our firefighters are, once they are gone it will be too late.”