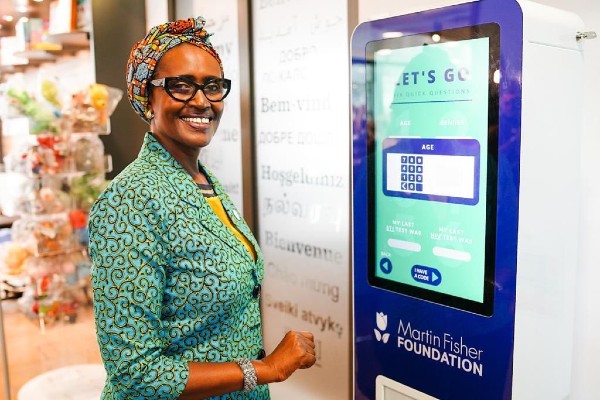 As part of her UK visit, UNAIDS executive director Winnie Byanyima stopped in Brighton to see first-hand the city’s world-class HIV services, including meeting with local community organisations and the leader of the Brighton & Hove City Council to discuss how the city has engineered such a successful HIV prevention and treatment plan.

As part of her role, Byanyima is spearheading initiatives to end new HIV transmissions by 2030, and came to the local area to witness the “effectiveness of political action combined with community-centred support in the fight against HIV”. In 2016, Brighton became the first city in the UK to join the Fast-Track Cities initiative, meaning it has pledged to meet the target of zero new HIV infections.

Now, Brighton is renowned for being a world leader in HIV prevention and treatment by exceeding the initiative’s target of 90-90-90. This means that over 90% of those living with HIV know their status, are receiving treatment and have undetectable levels of the virus in their blood, making it untransmittable.

During her visit, Byanyima saw Jubilee Library’s HIV test vending machines, which were installed by the Martin Fisher Foundation in 2017, and Brighton’s AIDS memorial in Kemptown which was created by Romany Mark Bruce and titled Tay. Byanyima described the work that local community organisations have done as “invaluable”, adding: “I feel enriched by everything I’ve learned from the city’s services. We will use lessons learned in Brighton to inspire our global response to the AIDS pandemic.”

Winnie also had the opportunity to attend Lunch Positive, a voluntary community organisation which runs a weekly lunch club, providing a welcoming and supportive space for people living with or affected by HIV. Here, she engaged with positive people living in Brighton and beyond and learned about the work Lunch Positive does to empower the local community and reduce stigma.

Marc Tweed, centre manager at Terrence Higgins Trust Brighton, affirmed that the city’s “local organisations are working collaboratively towards a stigma-free city.” However, he said that to reach the 2030 goal, there needs to be a “fully-funded HIV action plan from the UK government to ensure we can continue working to smash stigma and change perceptions of people living with HIV.”