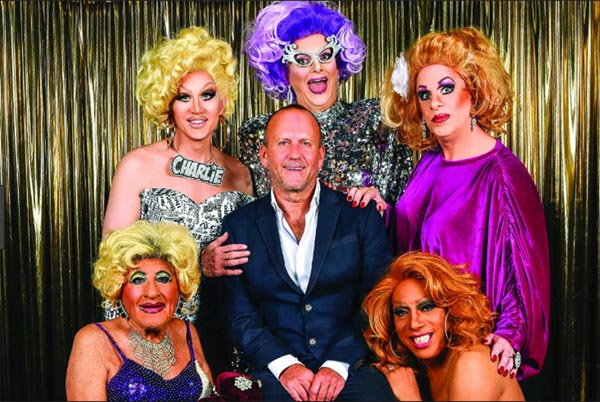 The Two Brewers in Clapham and Mary’s in Cardiff have both made it through to the final of a national competition to recognise the Best LGTB+ Pub in the country.

BOTH are owned by Stonegate Pub Company, the UK’s largest LGBT+ venue operator. With only four shortlisted pubs in the running this year, both stand a good chance of stealing the crown.

Multi award winning pub, the Two Brewers is legendary for its spectacular array of entertainment and street parties, as well as famed as a platform for launching new talent. The Two Brewers has created a safe, welcoming multi-cultural community hub that enables fledgling organisations and local groups to meet, practice, and perform in its space, feeding the production of over 600 events at the pub each year.

A flamboyant feather in the cap is the development, of Drag Idol. With the heats now attracting over 200 acts and the semi-finals encompassing 19 venues across the country, the final stage is held at the Two Brewers.

Winning awards is becoming a regular occurrence for manager Jimmy Smith, who was recently presented with The Lambeth Coat of Arms, a prestigious award usually reserved for councillors or significant contributors to the community, by the Mayoress of Lambeth. The Two Brewers has also been recognised for its Outstanding Support for the Community for its engagement with Pride London, and most recently it received the Certificate of Recognition for its contribution to the community from Lambeth.

Jimmy said: “We are so excited to be in the running for this award. There is some stiff competition on the shortlist, including our sister pub Mary’s, but we are confident that we stand out as a winning example of a great British pub that specialises in catering for the LBGT+ community. Our customers and neighbours are rooting for us to bring home the trophy so we have everything crossed!”

From the day it first opened its doors almost three years ago, Mary’s on Mary Street, has become known as a community venue and a safe place for all in the LGBTQ communities to relax in with friends and family.

Fun and fundraising are high up on the agenda at Mary’s, with entertainment on most nights, more often than not to raise money for good causes. Highlights include the Marytacular Fashion Show, which first took place on World AIDS Day last December to raise funds and awareness for the Terrence Higgins Trust. Fashion design students at the University of South Wales created 18 fabulous dresses for nine Drag Queens for the event, which raised £1,400 for charity. It was so successful that the university has now made it part of the curriculum.

Mary’s is also proud to have showcased the Drag for Autism initiative to raise funds and awareness for charities that support people with autism, as well as the Love Yourself night, which takes place on Valentine’s Day with proceeds going to Heads About The Waves, a charity that raises awareness of depression and self-harm in young people.

Manager Gordon Tovey, who has been on the gay scene himself for many years, actively campaigns to help make changes in the way in which society views the LGBT+ communities and encourage tolerance and diversity.

He said: “Our mantra at Mary’s is #NoLabels and we are passionate about being supportive and inclusive and offering a venue that is proud to be openly gay in which customers always feel welcome and safe.

“We often hold parties for people who invite their grandparents, parents and children along to celebrate with them in a venue where they feel at home. I believe that is testament to all the years of hard work and commitment to bring about change and acceptance of all those in our community; we treat our customers as family and we are proud of the fact that people of all ages and persuasions feel comfortable and welcome at Mary’s.

“We also work closely with other businesses, including other local gay bars, to promote tolerance and showcase Cardiff as the number one LGBT+ destination.”

Ed Bedington, organiser of the John Smith’s Great British Pub Awards, said: “These awards are the most rigorous of their kind for the pub sector and it’s a real achievement to make it this far into the competition.”

The judging process is three-rounds and includes a visit by the judges as part of the final process. The winners will be announced at an awards ceremony at the Royal Lancaster Hotel in London on September 6.

Simon Longbottom, CEO, Stonegate Pub Company said: “As the biggest operator of LGTBQ+ venues in London and across the country we fully support safeguarding the future of pubs and venues for this important sector of our community. Having invested in this sector over the last few years our development programme sees no slowing down, with a further capital investment of circa £2.2 million planned over the coming year. Greater flexibility of trading hours within London would further encourage investment, create additional jobs as well as better protect the provision of safe, welcoming LGTBQ+ venues for our customers.”