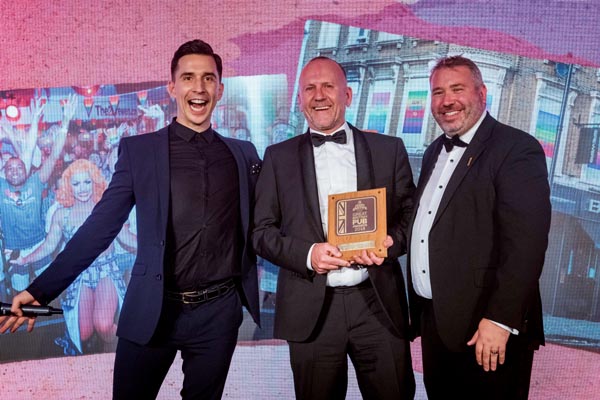 GENERAL Manager, Jimmy Smith, received the coveted trophy at a glittering awards ceremony, which took place in London on September 6.

The Two Brewers prides itself on providing a safe and welcoming environment for everyone. Having served the community for 37 years, the pub is firmly cemented in the hearts of both its LGBT+ customers, who come from far and wide to visit the pub, and Clapham locals.

Known for the hundreds of entertainment events that take place throughout the year, the Two Brewers is a legend across the late night and entertainment industry. Popular events include ‘Drag-Bingo’ and performances from a multitude of stars, including Lily Savage and wonderfully-edgy Pam Ann.

A flamboyant feather in its cap is the development, and subsequent phenomenal growth of, Drag Idol, with heats now attracting over 200 acts and the semi-finals encompassing 19 venues across the country. The final stage is held at the Two Brewers.

Jimmy Smith, who has been with the Two Brewers since the 90’s is no stranger to winning awards himself, having recently been bestowed the honour of the Lambeth Coat of Arms – an accolade usually reserved for councillors or significant contributors to the community – and the Outstanding Support for the Community award from the organisers of London Pride.

Both awards recognise the exceptional work Jimmy and his team do for their communities, year on year, as they frequently raise over £40,000 for a plethora of UK charities.

The Two Brewers has also been recognised for its Outstanding Support for the Community for its engagement with Pride London, and most recently it received the Certificate of Recognition for its contribution to the community from Lambeth.

The pub works closely with Amy Lamé, the Mayor of London’s appointed Night Czar, to protect and build a strong future for LGBT+ venues across the capital.

Jimmy Smith said as he collected the award: “It’s been a long time coming! To be recognised nationally as the best in the industry really is the icing on the cake, topping of all of the other awards we’ve won. I am so incredibly proud of the whole team and our wonderful customers – who make it all worthwhile.”

Chief Executive of Stonegate Pub Company, Simon Longbottom, said: “The Two Brewers is consistently one of Stonegate Pub Company’s best performing venues, frequently topping the table for revenues. I know how hard Jimmy and the team work to create a fun and entertaining, yet safe, environment for all customers. They thoroughly deserve this award and I can’t thank them enough for all the hard work they put in, year after year.”

The Awards have been running for 18 years and this year more than 1,000 pubs were in the running, across 19 different categories.

Ed Bedington, organiser of the John Smith’s Great British Pub Awards, said: “These awards are the most rigorous of their kind for the pub sector so it’s a real achievement to come out as a category winner. Congratulations to the team at The Two Brewers!”