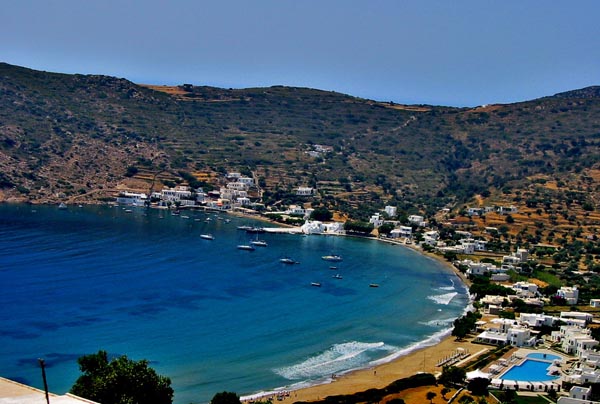 We thought that we knew all about the Greek Islands of the Cyclades, having visited Mykonos, Paros, Ios, Santorini, Milos and yes we were told that they are all different, but after a while they do tend to look somewhat similar.

Until, that is, we went to Sifnos. A tiny and little known island not too far from Milos but way off the major tourist trails, which has just a couple of ferries per day which bring all the islands supplies as well as the few visitors.

It seems that Sifnos is owned and run by just five families, everyone knows everyone else and no one locks their houses or cars.

Arriving in the pretty little port of Kamares, it’s the only port, you are aware of exactly how different this island is. It is extremely mountainous. The harbour front is pretty standard with tourist shops, cafes and car hire places, all owned by the same family, right behind this little port village is a mountain range which you can drive up. The view from the top is spectacular but not recommended if you don’t like steep hill climbs with vertical drops on one side.

There are quite a few decent four and five-star hotels for such a small island  but on our first night we stayed in what can only be described as a backpacker’s hostel, cheap but not particularly cheerful.

Next day we drove to the ‘capital’ Apollonia, a slightly larger village of 870 inhabitants, to look for another place to stay. There is one travel agent, owned of course by the same lady who owned the hotel we had just left.  Here we met Nick a most helpful man; he knew everything about the island and the accommodation.

He found us a beautiful house, Villa Delenia in a fabulous little seaside village called Vathi. This really had the wow factor, just 200m from a very quiet sandy beach, with little restaurants sitting almost in the water. There are several small bars and just two tiny shops.

The house had two bedrooms, two terraces, large garden etc., designed for five, we had it all to ourselves. We fell in love with Vahti and the Villa Delenia, the peace, tranquillity and general beauty of the place is quite simply gorgeous.

Everything about Sifnos is small, it has an area of only 75 sq km. What on the map seemed a long way, from the port to the main ‘town’ was in fact just 8km and 10 minute drive. With a population of just 2,625 there are no less than 365 churches, one for every day of the year.

Touring Sifnos is easy, just a few roads, well signposted and hardly any traffic.  Although small there is a lot to see and enjoy here, there are many headlands and lovely bays there are nine beaches, all sandy and gently shelving, but once you have found perfection as we had you really don‘t want to look anywhere else.

We were told that we had to visit Kastro, one of the most fascinating places on Sifnos. The village has been inhabited for over 3000 years and was at one time the capital of the island, its well worth a visit.

We were invited to lunch at Restaurant Cyclades at Platis Gialos one of the main beaches, the restaurant was owned by the same lady that owned the car hire company.  Everyone really is related to everyone.

Sitting quietly enjoying our lunch, nearly always fish straight from the Aegean, we overheard English being quietly spoken on a table nearby.  They were a family from Mere in darkest Wiltshire, all of us being so far from home in a little restaurant in a far-flung island we naturally started chatting.

We christened them the sea gypsies and although not very keen sailors ourselves rather envied them their relaxed nomadic seafaring life.

It’s a small world as it very quickly became apparent that whilst we had never met, we had mutual friends and apparently had been at the same party in Hove in the early 80’s, but we don’t need to go into details about that party.

Sifnos is quite simply beautiful, no one has heard of it, let’s keep it that way.