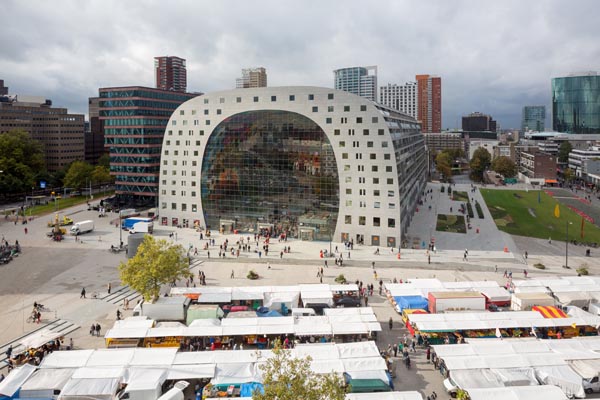 Everyone has heard of and most people have visited Amsterdam at least once and loves its beautiful architecture, canals and wonderful life style.

I used to live there and while I had visited most of the major centres in the Netherlands, I had never been to Rotterdam

Until now I had just assumed that it was just a huge port city, it is after all known as Europort – a very heavily industrialised port, the 10th largest in the world, with petrochemical refineries and storage tanks, bulk iron ore and coal handling facilities as well as container and new motor vehicle terminals.

No thanks I thought, I couldn’t have been more wrong.  Much of Rotterdam was reduced to rubble in the second World War but since then they have been very busy indeed, rebuilding a very modern city.

We were totally unprepared for the surprise; this city really has the wow factor.

A new fast train service takes just 25 minutes from Amsterdam to The Netherlands’ second city. In that short time you go from the 17th Century right to the 21st, arriving at one of the most startling railways stations I have ever seen. This stunning building almost defies description, apart from being a modern railway station it features a shiny steel-clad flying buttress reaching right over the plaza.  This building prepares you for the shock of a completely modern 21st Century city.

All the new landmark buildings and innovative construction is quite stunning, high-rise reflective glass and steel is everywhere. We stayed in the Marriott Hotel right in front of the station; this is an extremely modern and very comfortable hotel. Rotterdam isn’t high on many tourist’s agenda, so the price for this excellent four star hotel was just €81.50 a night – a bargain!  You can quadruple that sum for a similar hotel in Amsterdam.

The city centre is mainly pedestrianised, very easy to walk round with very modern trams gliding along. The streets are wide and even when busy Rotterdam never feels crowded.

Just a short walk from our hotel we discovered one of city’s architectural masterpieces the Markthal – Market Hall, this really does defy description.

A feat of fun and functionality, Rotterdam’s stunning Market Hall holds offices and over 200 apartments, with a covered market hall and public space. Its grey stone exterior arches, in the shape of a horseshoe, over the vast interior open space which houses a fabulous food market with many fun restaurants and bars. Coating the entirety of the inside of the archway is an enormous mural featuring an impressive array of fruit, vegetables, insects and flowers.  The PR says that the building demonstrates how beautifully art and architecture can come together, they’re not wrong.

Almost next door to the Market Hall are the unique Cube Houses, an experimental housing system devised in the late 70’s.  Structurally, the cubes sit tilted on a hexagonal pole. Inside, the houses are divided into three levels accessed via a narrow staircase.

Completing the tilted design, the walls and windows are all angled at 54.7 degrees, providing excellent views of the surrounding area. The only drawback – aside from claustrophobia is that despite a total area of 100 square meters, the angled structure means only a quarter of that space is actually usable. One is open as a museum, very curious and not somewhere where I could live but they are, amazingly, very popular.

It quickly becomes clear why this city is known as the architectural centre of the country and has been called Manhattan on the (River) Meuse.  But of course there is a lot more to this amazing city than its breathtaking architecture. The Luftwaffe didn’t destroy everything and there is still a lot of the old city which has been carefully restored.

One of the most famous landmarks is the Hotel New York, based in the former HQ of the Holland America Line which operated a direct service to America by sea. During the 19th and 20th century thousands of Europeans left for the Promised Land: America. It was an attempt to escape poverty and religious repression. It was opened as a hotel in 1992 and has been beautifully restored, well worth the walk to visit.

Rotterdam is very much a walking city, though trams are very cheap and efficient.  We hopped on a tram out of the central district just to see where it took us and we ended up in Delfshaven.  This picturesque yacht marina is one of the parts of the old city that survived the 1940 bombardment of Rotterdam. It has had a remarkable history and was apparently the departure point from which the Pilgrim Fathers left to found what was to become the USA.

There’s a  lot to see and enjoy in this surprising city, the gay scene is not large, a couple of bars and of course a sauna, but in any major Dutch city everywhere is potentially gay!