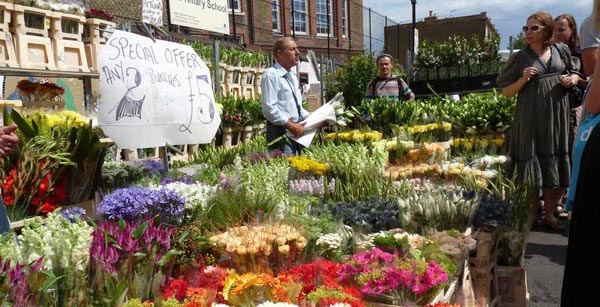 The Village People and Pet Shop Boys have been telling us to Go West for years, but today the mood in London is more Go East. Roger Wheeler and his husband Mike Go North to see what all the fuss is about.

East London is now the place to be, Shoreditch and Hoxton, once known as very deprived areas is now Tech City. What was once just a congested roundabout in Old Street is now referred to as a Silicon Roundabout.  Now there are lots of uber smart hotels, restaurants, 30 or so very trendy cocktail bars where the Hoxton Hipsters congregate to drink. Hoxton Square is now fully stocked with ‘speakeasies’ designer shops, artist studios and galleries, mind-blowing choices of places to eat some very exotic foods.

Of course, Brick Lane has been the centre of Indian cooking for decades, but today it is no longer the best place to find decent food. All this slotted among of some of the oldest social housing estates in London together with beautiful Georgian townhouses and lovely little canals, although everyone seems to live happily alongside each other. There does not seem to be any clash of cultures. Of course many of the new hi-tec IT businesses are located here, some of them world leaders in their fields. This is really the centre of new British business.

I was born in SW London. My mother rarely went north of the river let alone ventured into the East end – but that was a long time ago. So having read so much about the new East we decided to spend a weekend there.

Montcalm hotels are a new group and they have built one of the most amazing buildings I have ever seen. Called M by Montcalm this is a 400 room hotel on the city road. OK you might say so what? When you look at it, it looks two-dimensional, a 17 storey boutique hotel, it is almost impossible to take it seriously. The design of the exterior, including cladding and windows, is sloped at an angle, a myopic optical deception. Built at an obtuse sharp angle it is almost impossible to recognise it as a hotel.

The rooms are pretty standard, very nice, large beds, bathrooms etc., except the windows are at this strange floor to ceiling angle, disconcerting at first, particularly on the higher floors.  There is a spa in the basement, every hotel in the world now have a spa, this one has a good swimming pool which was great for a before breakfast dip. Dinner in the 17th floor restaurant is excellent, if you can get a table by a window, (they don’t reserve them), the views across London are stunning, but keep away from the slanting full-length windows if you suffer from vertigo.  The foods not bad either.

So onwards to immerse ourselves in Hip Hoxton Square, there is too much choice for us poor provincial tourists to take in. We wandered into Le Petit Pois, a small, very French restaurant and sampled some of the best food we have had for some time. Just round the corner in Curtain Road there is The Queen of Hoxton, a venue with everything from rooftop BBQ, basement restaurant, DJs and retro arcade machines.

Columbia Road flower market on a Sunday is fun, as is the wonderful the Geffrye Museum of the Home on Kingsland Road, its free, it’s a must see. A fascinating exhibition of domestic homes and home life in London since 1600. Worth an hour or so of anyone’s time.

The list of things to do, see eat and drink in Shoreditch is simply amazing, we went back for another weekend and will go again.  London’s West End is, today, strictly for the serious tourist, with its 53 five-star hotels, endless bad restaurants and tacky attractions.

Of course the famous sights are always worth seeing and there are some excellent restaurants and the theatres are world-famous. So for comparison sake we spent a weekend ‘up West’ as my parents would say.

We booked into in the unremarkable Hilton Doubletree in Southampton Row, a perfectly acceptable hotel right by the British Museum. We saw the fabulous Book of Mormon at the Prince of Wales theatre, a show to end all shows and had dinner in the amazing Brasserie Zedel in Sherwood Street, just off Piccadilly, where you can get a very decent meal for around £20, in  a very French bistro style.

There are thousands of restaurants in London, most worth avoiding but we do have a favourite called Andrew Edmunds in Lexington Street. It’s a small independent restaurant housed in the last original 18 century townhouse left in Soho and run by the lovely Oliver. Lexington Street is minutes away from Old Compton Street so not far to go for the central gay scene, which has nowadays in our humble opinion has become a little tired and faded round the edges.

So West or East, both have something going for them, but for us the East End is now where it’s at and of course you can always hop on the tube and go ‘Up West’

As Samuel Johnson said 250 years ago “When a man is tired of London, he is tired of life” that’s even more true today.

For 10 reasons to visit Shoreditch and Hoxton, click here: