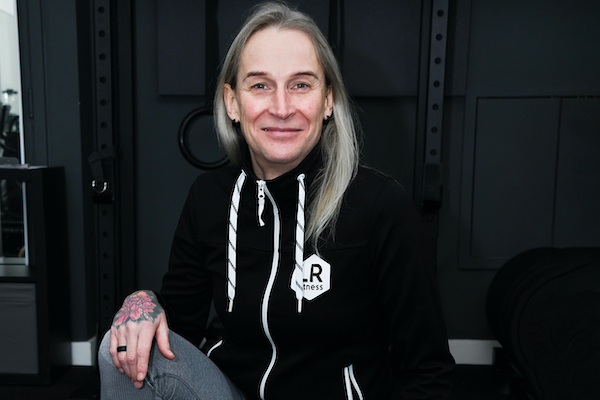 Liz Ridgway talks to Jaq Bayles about her journey to trans woman, fitness trainer and advocate for the LGBTQ+ community

From stage manager for theatre and music, to ‘tart with a cart’ in Qantas First and Business-Class long-haul, to retail, to running her own business as a personal trainer, Liz Ridgway has seen her fair share of transformations over the years – not least being her own transition.

Armed with a wealth of knowledge garnered in various sports as well as gym work, Liz is now on a mission to empower more people with the physiological, mental health and social benefits of staying fit, with a particular focus on trans and non-binary people as well as the wider LGBTQ+ community and women.

Currently working as a PT at The Gym Group’s Madeira Drive outlet, she also has a healthy online presence, saying: “There are very few trans PTs in the UK or around the world, so I have to be accessible for clients as they aren’t just based here. They are in London and around the country – I even have some clients overseas.

“I spent all that time in gyms and people were saying: ‘Liz, you know so much. Why, don’t you take this to other people and help them to be knowledgeable and confident in a gym?’ Particularly for women and trans people, gyms are pretty intimidating places to go. I had this background experience and was confident in a gym and there’s the fact that I am trans, which is a little bit odd, but there was an opportunity for me to help trans and non-binary people, LGBTQ+ women and cis women be a little more confident.”

The face of gyms has been slowly but surely changing in recent years, and Liz has been one of the architects of that change at The Gym Group, which has some 1,600 employees and 120 sites around the country.

“I have experienced a lot of harassment, particularly in retail where I worked behind the counter and on the shop floor, but The Gym Group at Madeira Drive is really inclusive, super-queer – a very large percentage of members are LGBTQ+.” But she has been doing a lot of work strengthening that diversity and inclusion.

“We have had a number of different streams around gender and disability and LGBTQ+. The organisation has been really keen to move forward and make the place more welcoming for those groups of people and trying to move away from this hyper-heteronormative, masculine behaviour that we see so often in gyms.

“When we first talked about how we could be more welcoming, we were really open as an organisation that we weren’t inclusive enough, particularly for trans and non-binary people, but more widely for the LGBTQ+ community, so we discussed some objectives we could work towards to demonstrate a visibly welcoming nature.

“During Trans Awareness Week we launched a trans inclusion policy for employees and members; I also wrote tips for the company intranet on how to be great trans allies.

“We are really opening up and looking at the ways not just LGBTQ+ people but older people, non-white people can feel more welcome and included.

“I feel really good about using my experience as a trans woman in this way. It’s wonderful to see – despite what we are shown in the media – a lot of organisations are keen to be more trans aware. I’m honoured to be asked to work on that kind of stuff.”

It’s been a personal journey for Liz, who is originally from Adelaide, Australia, and came to the UK in 1996 “for a holiday, and 25 years later I’m still here”. She spent a good few years working in the arts at London’s Barbican, although she always played sports alongside that, which, she admits, “is an odd mix really, having sport included with the arts, but I’ve always been a bit of a fitness bunny”.

Getting to the point where she needed “a bit of change”, she spent seven years flying round the world with Qantas “at the pointy end of the plane”. This coincided with her sister being ill, and meant she could return to Australia “a couple of times a year as opposed to once every five years”.

Liz picks up the story from when her sister sadly died: “I was in the middle of my transition so I came away from that and started in health and fitness and a bit of retail to help support my business and growth, and gained my qualification as a personal trainer.”

Her transition started around 2007 and when she I felt she was towards the end, “which came with a medical transition”, she got to a new point in life.

“I thought I could live a little bit more authentically, so it was the choice to move to Brighton. I wanted to be by the seaside with a smaller community. I moved here in 2017 and that’s where I slowly started my business.”

Working in Marks & Spencer to support herself, she also joined a men’s Australian football team, which had another couple of women players, and between them they decided to start a women’s team. “Thus we birthed the Sussex Swans women’s team,” says Liz. “In 2017 there were just one or two of us, now we have a squad of about 35 women and this year have been competing against all the teams up in London.

“It’s just so rewarding to see spaces for women to play sport and that’s probably what I’m most proud about,” says Liz, who was recently presented by the club with a lifetime membership. “I feel proud that I’ve been able to make space for women to play sport, made a big contribution to keeping the club going and then handing over to other people as my body becomes a bit older and tireder and recovers from injuries a bit slower.”

But she’s not about to slow down personally and it’s her mission to support others on their own fitness journey. So what is that her clients ask of her?

“It depends on the individual, but generally people want to feel better about themselves and their bodies, particularly after the last couple of years. Some of my clients want to make changes to their body, so it’s about strength and conditioning, toning. Other people want nutritional advice about how to manage stages in their life.

“Generally they are looking for someone to hold their hand, help them feel more confident, create space for themselves and impart some knowledge about how to train their body and live more holistically.

“It’s not just about lifting weights but things we can do to improve our flexibility, central nervous system, neural pathways. It’s fascinating what happens to the body when we start moving. It’s a combination of muscle building, strength building, some weight loss, body transformation and the mental health aspect. I teach people how to find their wings and off they go.”

The online side of her business has been something of a revelation. Like many people she was forced during lockdown to make changes to her life and, along with a group of like-minded trans people during the early days of lockdown, started doing some Instagram live broadcasts across the world.

“We thought that if others saw a few dozen trans people congregating and talking about their experiences of lockdown and so forth, surely we could make a difference.”

This led to Trans Can Sport asking her to do some online classes, “and that brought me from zero to heroine.”

She continues: “I decided I wanted to give more opportunities to people who weren’t working and I just knew that being able to move your body at home would be beneficial in some way. I put together three of four different programmes on a website and reached out to trans, non-binary, non-trans women and the LGBTQ+ community. During lockdown I was doing about eight classes a week.

“It was on the basis it was going to be free or pay as you can, which is a wonderful thing about our community – we do these kind of things, pay as you can or pay it forward. It was a really great experience despite all the difficulties and being locked up. That pushed me into online.

“There’s a certain amount of privilege around being non-trans because you can access spaces easily, travel easily and in the current climate, which feels quite hostile to trans and non-binary people, I know much of the community are hiding away. Being able to reach out via this kind of format is vital in some ways.”

New Year is one of the busiest times in the fitness industry, but how many people actually keep up their resolve into the spring?

“A lot of people do fall off their journey but I always talk about making incremental changes as opposed to popping a mountain in front of yourself, putting your backpack on and starting off on the trek. If you can break down those massive changes you’ve decided to take, successful long-term change is more accessible.”

Liz’s own goals for 2022 include being involved in a Pride again and getting back to being a DJ. “The last gig I played was the closing night party of Trans Pride 2019. It was a wonderful moment, kind of a dream.”

Thanks to Platform Fitness Studio for the use of the studio