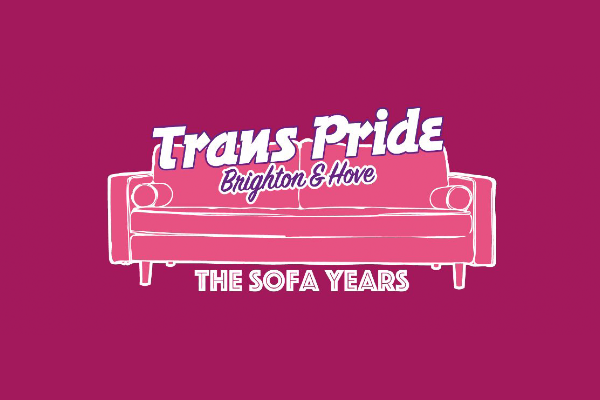 Trans Pride Brighton & Hove takes place online again this year with the annual celebration of trans life and the coming together of community live streamed on Saturday, July 17.  Rory Finn rounds up what to expect.

Starting from 12pm, the line-up for the event will include speakers and performers who will be joined by a small TV studio audience. This year they will be using Ironworks Studio, a local professional TV studio, and their broadcasting expertise. Combining live performances with pre-recorded ones, with some of it being filmed at Green Door Store or recorded elsewhere. As with previous years you can expect to see an eclectic mix of music, spoken word and poetry and artists, all from the trans community. There will also be workshops with topics including workers’ rights and unionisation, sports and fitness, and wellbeing.

Trans Pride seeks to show the trans community in all its joyous glory – trans people as artists, musicians, writers, performers, as well as trans people as everyday people just getting on with their lives. Just existing as ourselves is a source of Pride and being able to celebrate our lives is part of the journey towards full liberation.

To raise money to run the event, Trans Pride is selling souvenir T-shirts to commemorate the Sofa Years. These limited-edition hand-printed T-shirts will show your support for trans, non-binary and intersex communities and can be purchased from www.transpridebrighton.org/.

Talking about the success of last year’s event, Sarah Savage, chair of Trans Pride, said that between 15-20,000 viewers tuned into the live stream on Twitch and the YouTube channel had over 1,000 concurrent viewers. The comments section was buzzing with activity and really brought people together, “people were in the chat talking about how amazing it was and how much they were enjoying it”. Some even went on to set up Discord server chats and exchange contact details in a similar way they would have done at the in-person park event.

Trans Pride, a registered charity, has received funding from Comic Relief’s LGBTQ+ Covid-19 Recovery Fund, in partnership with METRO Charity and NAZ, to continue its work. They’ve recently taken on new trustees and with the help of funding have for the first time created two temporary paid roles of project manager and community manager, which will support the overall aims of the organisation.

• Esme, a harpist from Brighton, will transport you away to another place with songs that touch on themes of identity, gender and attachment.

• Indie folk from Colours and Fires, a group that spans the gender spectrum. Their songs give insight to personal transformations across genders and relationships.

• Non-binary sea creature The Mollusc Dimension is an East-Asian British artisit who invites you to draw while he brings you magical songs.

• Bouncy guitar based music with quirky lyrics by folk-punk band The Spirits.

Trans Pride Brighton & Hove 2021 occurs at a time of heightened visibility marred by divisive and damaging media coverage of the trans community.

We see trans people discriminated against in access to healthcare, employment, housing, sport, services, justice and facilities. Transgender children are vilified in the media, bullied at school, used as a political football and have their identities doubted.

We’ve seen a continuation of the divisive coverage of proposed changes to the Gender Recognition Act, as well as hurtful and often dangerous coverage of transgender children, who are some of the most vulnerable people in our society. Recently we’ve also seen attempts to restrict the right of transgender people to participate in sport, with decades-old legislation and sporting policy being attacked. Meanwhile, trans people struggle to access healthcare, with waiting lists for Gender Identity Clinics stretching to five or six years in some parts of the UK.

There has been a long-running debate in the media about the validity of trans people’s lives; Trans Pride is here to say that we are real, we are valid, we are talented and we can be loved.

We want to make a space for trans people to feel welcomed, loved and respected for who they are. We love Pride, but not all of our community feels as welcome at some events as they should, which is why we’re here. The trans community is small and it can be easy to lose sight of us at big events. At some events we’ve seen protests against trans rights, many of which are by people not even part of the LGBTQ+ community. We are pleased to note that we’ve had wonderful support from other parts of the community, and particularly from the successful #LwiththeT, #GwiththeT and #BwiththeT campaigns.

We hope that by taking this opportunity to celebrate our lives and our achievements with our friends, families and allies, we will be able to show off the amazing people we call our brothers, sisters and siblings.