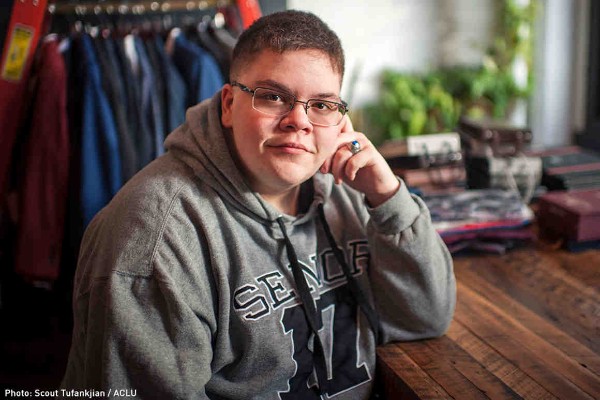 22-year-old Gavin Grimm, an American trans man living in Virginia, has won a $1.3m payout after being denied access to the correct bathroom facilities at school in 2014. Grimm, who was 15 years old at the time, was blocked from using the boy’s toilets by the Virginia Gloucester County School Board, leading him to sue on the basis that the board’s policy went against Title IX – a law that prohibits sex-based discrimination.

With the support of the ACLU and ACLU of Virginia, Grimm’s case was eventually taken to the Supreme Court, which denied an appeal from the school board earlier this year. On August 26, the case officially came to an end, with ACLU announcing that the Gloucester County School Board will be paying over $1.3 million in attorney’s fees and costs to Grimm.

Josh Block, senior staff attorney with the ACLU LGBTQ & HIV Project, said he is “glad” the case has been resolved, even though “it should not have taken over six years of expensive litigation to get to this point.” The ACLU hopes “that the fee award will give other school boards and lawmakers pause before they use discrimination to score political points.”

Grimm himself added: “Rather than allow a child equal access to a safe school environment, the Gloucester School Board decided to fight this child for five years in a costly legal battle that they lost…I hope that this outcome sends a strong message to other school systems, that discrimination is an expensive losing battle.”