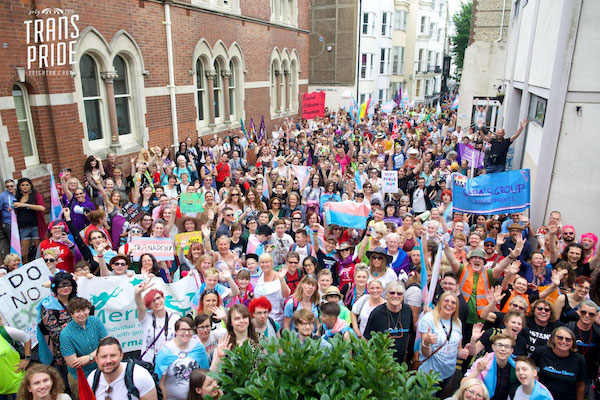 Trans Day of Visibility is celebrated on March 31 every year. It may feel these days that trans people are everywhere. It’s true, we are. We always were. This year we will be officially counted in the census for the first time. For the past decade we’ve been relying on best guesses to figure out how many trans people are in the UK. In 2015, Brighton & Hove City Council estimated that there were 2,700 trans people living in the city, or about 1% of residents. Compare that to the Office for National Statistics claiming that only 2% of the population identify as lesbian, gay or bi. I invite you to draw your own conclusions.

“Visibility is vital to advancing our interests as trans people. We have a government which is openly hostile towards us and quite content in playing politics with our rights”

Regardless of numbers, trans rights are very much on the agenda, of both our allies and our foes alike. 2020 will go down in my books as not just the year of Covid but also the year when transphobia in the UK reached a new fever pitch. With front page stories on the likes of The Times declaring that the PM himself, no less, was planning to shelve plans that would allow trans people to amend their birth certificates. The Gender Recognition Act is a red herring of trans rights. The one-time radical bit of law has now faded into being behind the times and not fit for purpose. The consultation exercise for how best to amend this legislation has unleashed a toxic load of transphobic sludge from which endless smears and hate have arisen. Enter a certain influential children’s author who publicly trolls the trans community, regurgitating transphobic tropes, much to the disdain and horror of her previously adoring fans and the actors who brought her books to life. It’s one thing to have an opinion, no matter how misguided, but it’s quite another to use your influence and platform to promote hate. It really felt like it wasn’t just a virus that was out to get us.

Thankfully all this has revealed true allyship from every corner of the LGBTQ+ community. It has been amazing to see the groundswell of support, online and in person. Even more importantly, seeing the community reacting so strongly when those transphobic voices come from within our own ranks and gay media. We must be vigilant about those who seek to divide us. It ultimately affects us all.

“The weight of poor representation is immense; trans people being framed as serial killers, unhinged villains and objects of disgust. It is no wonder cis people fear us. It is no wonder we struggle to come to terms with who we are”

I have the mixed blessing of being a ‘passing’ trans person. By this I mean people assume I’m cisgender (ie not trans) until they find out otherwise. It’s a blessing in that I gain some privilege by being perceived to be a cis man. I’m not questioned anymore about which toilet I use and rarely get misgendered (when I do, it’s because someone has the wrong end of the stick and thinks I’m a trans woman). Coming out regularly is exhausting and it doesn’t always get acknowledged. I had an encounter recently when I told someone, no fewer than three times, that I was trans yet they still didn’t comprehend that I wasn’t cis. I was trying to explain to them that I understood how to communicate with trans people better than they did.

Cisgender is the default assumption, so to lead an authentic, congruent life, I am open about my trans status. It informs how I navigate the world, the work I do and the perspectives I have. By being visible I am both more at risk of transphobia but paradoxically I am empowered. When I can choose when to disclose, I hold the power that comes with it. When I am outed, that is taken away from me.

“It may feel these days that trans people are everywhere. It’s true, we are. We always were”

Visibility is vital to advancing our interests as trans people. We still do not have any openly trans representation in Parliament. We have a government which is openly hostile towards us and quite content in playing politics with our rights. In late February the House of Lords debated removing rights from pregnant trans masculine people. A simple semantic shift from ‘person’ to ‘woman’ is all it takes. The usual form is for legislation to be written in gender-neutral language. The wilful ignorance of the Lords is staggering. Legally recognised men do get pregnant and have children. See Freddy McConnell, the subject of the documentary Seahorse, being denied the legal title of father to his child (the courts insist he is the mother), despite holding gender recognition and being regarded as male in every other aspect of his life.

This is a deliberate attack on us. Baroness Liz Barker advocated against the amendment, lamenting that trans people are under a “sustained unwarranted attack”. She went on to describe how hostile the media has been. The Times, she says, which is read by many in power, has “each of the last two years… had over 320 articles about trans issues. Almost all of them full of gross misrepresentations”. Representation matters and our visibility is power, no matter how much they try to erase us through other means.

So how can we unpack this narrative to see the woods from the trees? Disclosure (Netflix 2020) documents trans representation in cinema and TV since the early days of film. The weight of poor representation is immense; trans people being framed as serial killers, unhinged villains and objects of disgust. It is no wonder cis people fear us. It is no wonder we struggle to come to terms with who we are. No one wants to be Buffalo Bill.

Disclosure does an incredible thing. It helps trans people to understand why we might feel the way we do and educates everyone about the power of representation, good or bad. It also shows hope and proves the power of visibility. In 2014, Time put Laverne Cox on its cover, proclaiming the “transgender tipping point”. Since then, many doors have opened for trans storytellers and with it many people coming out. You can’t unsee the beauty and diversity of the trans community now. Perhaps that’s why they hate us. In spite of all the hate, our time has come for our stories to be told, by us and with love.