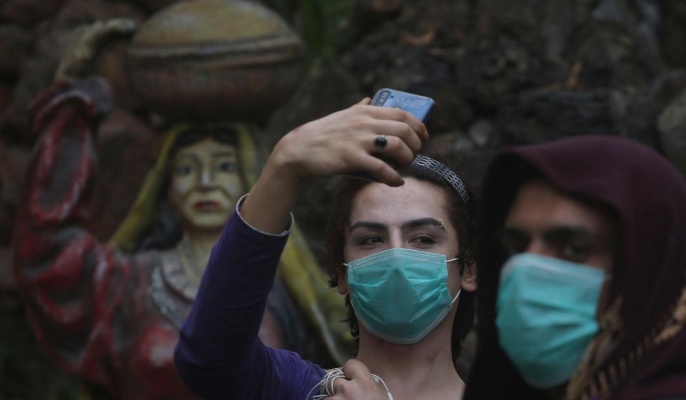 The trans community in Pakistan is facing acute hardship during the lockdown that’s in effect across the country. Weddings and other celebratory functions were a main source of income for many of the country’s trans women, who are now unable to work. Despite relief packages announced by the government, help isn’t filtering down to the poorest and most vulnerable, who are often reliant on Non-Governmental Organisations (NGOs) for support. Many of these NGOs have suspended work while current measures are in place.

Shakila, a trans women from the Peshawar region, spoke to English language publication The News: ‘We are the most unfortunate human beings on earth because neither the federal nor the provincial government has bothered to consider our plight. The government and the philanthropists are giving relief packages to others, but have ignored us as if we are not humans.’

Before lockdown some trans women were able to work, but many have to resort to begging. Those able to save a little money do so to pay for treatment. Shakila added: ‘It hurt us when the federal and provincial governments announced relief packages for industrialists and government servants, but ignored the most neglected section of the society.’

The country has an estimated half a million trans people, which dwarfs the official statistic of over 10,000. Free healthcare was extended to trans Pakistanis in January but there’s still much to be done for the community. It’s thought that 7% of trans people in Pakistan are HIV positive, and globally trans people are 49 times more likely to be living with HIV than the general population.

Faizan Fiaz, London-based filmmaker, who documented the plight of transgender Pakistanis in their film Poshida, spoke of their experience of this marginalised group. ‘Pakistani trans women, known as Khawaja Sira, are among the most marginalised and vulnerable people in Pakistan. Most rely on sex work, begging and providing illicit entertainment – activities which put them in close contact with others – to make ends meet. This puts them in a more precarious situation than the general population in normal circumstances, but obviously more so during the Covid-19 pandemic.’ The plight of Khawaja Sira in Pakistan needn’t remain bleak. Fiaz goes on to say: ‘The means exist within and outside Pakistan to ease the situation for Khawaja Sira (and all minorities who are suffering). Highlighting their plight is one way, supporting human rights and trans rights organisations is another and so is putting pressure on the Pakistani government.’

Poshida, a ground-breaking independent documentary, follows LGBTQ+ individuals in Pakistan, explores their history, culture and challenges and examines sexuality and gender identities in south Asia and discusses colonialism, religion, class and the influence of US foreign policy. To view it, visit Facebook @PoshidaFilm

FemSoc LUMS, a feminist student society at Lahore University of Management Sciences, is fundraising to provide emergency rations of food and soap for the transgender community. Donations can be made via Facebook @FemSocLUMS